Infested Corpus head resembles a severely mutated Corpus with a mouth taking up its entire face which has two tentacles on either side to cover it up when not attacking. It can spit poison grenades at great distances leaving behind

clouds that deal very high damage and ignore shields. It can also release Infested Spawn Pods which will spawn multiple basic Infested units over-time until it is destroyed or expires on its own at which time it also leaves behind a cloud of poison.
Infested Grineer head has a triangular jaw and wields a massive organic scythe-arm. It will either swing its scythe in a wide horizontal arc or crashing down in an overhead strike. The scythe is capable of destroying obstacles in the arena as well as inflicting knockdowns with every hit. Its face is located below the triangular jaw, which is apparently the Grineer that was consumed long ago; it will only reveal itself when it attacks.
Ancient Infested head sports a long, stout jaw as well as the "halo crown" that normal Ancients have on their backs. It will spit an arc of Spore Bombs that explode a second after hitting the ground. While the bombs have a massive radius, they do not ignore shields, however, the massive damage can kill any low level warframe in one hit. 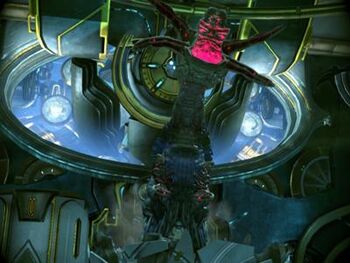 When the Corpus head is near death (assuming you didn't significantly damage the Ancient head), the Grineer head will join in. Thankfully, its attacks are relatively inaccurate and its biggest threat to you will be emerging from beneath you and knocking you down. At this point all three heads will be able to attack you at once, so you may want to be more aggressive and knock out the Corpus head as soon as possible to avoid being overwhelmed.

Once the Corpus head is down the rest of Phase 1 should be relatively easy. Destroy all of the remaining Spawn Pods as well as the Infested minions. Now focus on the Ancient head. Every time it spits an arc of bombs at you simply sprint towards the head to avoid the explosion (you will still get hit due to their massive range, but the damage is negligible long as you have decent shields). The Grineer head is generally too inaccurate to hit you with its scythe and can be out-ranged very easily, though it tends to emerge right next to or outright beneath you which can often knock you down. Simply keep your distance from the Grineer head and knock out the Ancient head.

Once the Ancient head has been taken out the Grineer head should be a walk in the park. Remember that it cannot hit you if you stay directly beneath it, so when it bursts up run straight towards it, stay as close to it as possible, and blast away at its "face" every time it swings. The mouth itself is also a weak spot, but you can only damage it when it opens which is when it attacks, so you have 2 weak spots to choose from. If you are below the head then shoot the face; if you are further away it might be easier to shoot the mouth rather than aim at the face from an uneasy angle.

Once all three heads have been fought off, you will be given a brief moment to pick up goods remaining on the arena before all three heads emerge at once and bring down the entire platform. Players will fall down into the ruins below, where the rest of Lephantis resides.

Phase 2 is essentially the same as Phase 1 except all three heads can attack in conjunction and the heads cannot retreat. The environment is darker and tinted red due to the nature of the arena which may cause trouble to those with difficulty dealing in such an environment. Again, you should focus your efforts on the Corpus head due to its lethality though you could also attack the Ancient head instead as it's an easier target to hit this time.

Standing directly in front of one head greatly helps, as it makes it difficult for the other two heads to attack you, but they will still try. The elevated platforms can be of great help as the Grineer head has trouble hitting people who stand on them as long as Lephantis is not right next to the platform. If Lephantis is close enough (as in so close it cannot move forward anymore), it can perform a higher side-slash to hit you off the platform, though the slash can be rolled under with good timing. Do not get too close to Lephantis or he will knock you down with his body slam. Avoid any electric pools and poison clouds as they can drain your health without you knowing until it's too late. Consider keeping some infested spawn pods alive as the spawned Infested can drop ammo and energy orbs. Try to focus on taking down the same head one at a time while avoiding the other two (though keep an eye on them so you can avoid their attacks).

Bring down the heads one at a time until you emerge victorious from the battle.