體力 are a set of actions that a player can perform with the warframe and melee weapon. This includes rolling, wall running, sword play, and acrobatics.

Stamina is a resource that is self charging and able to be depleted, which is used to sprint, melee, wall run and block. It is shown in the top right warframe conditions info box as a green bar under the blue energy bar. Melee, sprinting, wall running and blocking will exhaust a player's stamina in seconds upon performing the action. When a player is not using any of the stamina dependent maneuvers, the stamina will recharge at a fast rate. It is possible to increase a frame's maximum stamina and the stamina recharge rate with stamina-based mods like Quick Rest or Marathon. The melee mod Second Wind can provide boosts of stamina upon killing enemies with your melee weapon, making hit-and-run combat more viable as melee drains stamina quickly.

All Warframes have a base stamina count of 100 except Valkyr and Hydroid, who have 150. Level has no effect on stamina.

Stamina orbs are available for pickup only in the Clan Dojo's Obstacle Course. 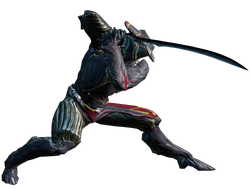 Sprinting will cause the frame to lower their weapon and move at a greatly increased speed. Each warframe may have a different speed modifier for sprinting. Sprinting speeds can be increased with Rush.

Note: In options you can configure a new Key Binding to Toogle On/Off to auto-sprint. This is useful to make maneuvers without holding the sprint button all the time.

Rolling is a basic combat evasive maneuver used to get out of the way of a charging enemy, to evade bullets, grenades or melee attacks and to transition from cover to cover. It can also be used as a stealth maneuver while crouching. The short burst of speed can avoid detection in situations where the slow crouch-walk speed is not sufficient.

Note: Rolling shakes free any Latchers or Leeches stuck to the player. The player should vacate the location as Latchers will still explode a few moments later.

Crouching lowers the warframe to an average of about half height, increasing survivability and stealth by presenting enemies with a smaller hitbox. When crouched, near-normal movement is still possible, albeit slower. You can, however, still roll while crouched. If crouch is toggled on, you stay crouched.

Sliding is crouching during a sprint. This will bring a frame to a gradual stop (Except when sliding down a slope). While sliding, no stamina is used. After a few seconds of sliding Stamina will start charging. Ranged weapons may be used while sliding and a melee attack creates a separate combat maneuver.

A basic function that uses a minor amount of stamina. Many powers cannot be used while jumping.

This action will help maintain momentum and allow the frame to travel further. Your jump distance is also improved allowing you to reach distant places.

Divekicking will knock down most enemies on hit, inflicting a minor damage of 20

While sliding, pressing the jump button will cause the warframe to jump and front flip in the direction it was sliding. In mid air the player can hit the crouch button again to resume sliding on land (This can be done infinitely. Simply keep pressing the Move Forward key (default "W", L3 forward). Example use: if the player is currently sliding into a low cover, they can choose to flip over it and instantly continue sliding behind it. 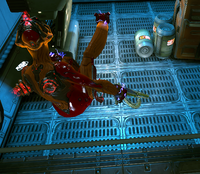 Added on Update 11, this maneuver can be done on obstacles half the size of the Warframe, allowing more movement across blocked paths with ease. Jumping while near these obstacles causes the Warframe to vault over them, whether Sprinting or not.

This mechanic can be changed in the game settings so the automatic vaulting is turned off, which helps for some instances where vaulting should never occur, like ledges.

While holding the aim button hold the back key and tap the roll button to do a back handspring.

While holding the aim button, hold the left or right key and tap the sprint button to do a back sideways roll. This is very useful while trying to fight around grineer and with seekers or against bosses with slow attacks. The two dodge roll animations differ slightly, as the leftwards dodge roll includes a small hopping animation that the warframe completes at the end of his/her roll, while the dodge roll to the right is simply a roll.

Run at a wall then press and hold jump and a directional key. All wall running maneuvers require stamina which is drained over time.

Run at around a 90 degree angle toward a wall, then press and hold jump to run straight up. Upon releasing the jump key or movement key the warframe will backflip off the wall. If the top can be run onto, continue to hold the jump and directional keys to simply run up and over the edge to a stand. The faster the sprint speed of the frame, the higher it can climb. 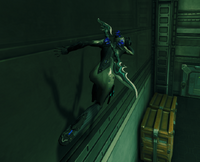 Sprint with less than a 70 degree angle towards a wall and press and hold jump to run horizontally across the wall. Releasing jump will cause the frame to leap from the wall with an accelerated speed. Sloping, non-hard-angle, corners can be run around; this enables many short cuts. Zooming, shooting, blocking, and many powers may be performed.

After running up a wall, a Tenno will grab the wall and begin to slowly slide down. During this, a Tenno may fire his/her weapon. Letting go of the jump button while sliding will cause the Tenno to backflip away from the wall. Pressing the melee attack button will cause the Tenno to jump and slash (see "Wall Attack" above) toward the direction of the crosshair. tapping or toggling crouch will make the Tenno slide when they touch the ground.