A Specter is an AI-controlled ally unit that will fight alongside a player for the duration of a mission. They have their own set of weapons and/or abilities that they can use against enemies, and are generally summoned via a consumable Gear item.

Tenno Specters can act as allies or enemies depending on its usage. As equipment, Specters are AI-Controlled Warframes with customizable load-outs which can be summoned during regular Missions except Archwing; As enemies, Specters serve as guardians of a Clan's Solar Rail which contesting Clans have to face during a Solar Rail Conflict, in that case these specters are known as Specter Regiment as a whole. A Specter Regiment can be created through researching it in the Clan Dojo's Orokin Lab.

Their blueprints can be acquired by completing Rescue missions, with the type of blueprint awarded depending on the node that was played, and how many points were acquired. In total, three points can be attained in a mission: one for rescuing the target, one for not triggering the execution sequence in the process, and one for killing all the Wardens.

The Vapor Specter (or Bronze Specter) blueprint is rewarded from Easy and Medium difficulty Rescue missions, and yields 10 Specter uses per build. Spawns at the starting level of the enemies in the current mission.

The Phase Specter (or Silver Specter) blueprint is rewarded from Easy, Medium and Hard difficulty Rescue missions, and yields 5 Specter uses per build. Spawns at the starting level of the enemies in the current mission, plus three levels.

The Force Specter (or Gold Specter) blueprint is rewarded from Medium, Hard, and Nightmare difficulty Rescue missions, and yields 3 Specter uses per build. Spawns at the starting level of the enemies in the current mission, plus five levels. 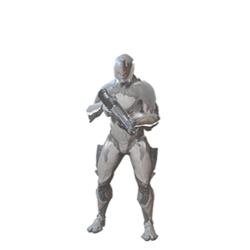 The Cosmic Specter (or Platinum Specter) blueprint is rewarded from Hard and Nightmare difficulty Rescue missions, and yields a single Specter usage per build. Spawns at the starting level of the enemies in the current mission, plus ten levels.

Their blueprints can also be acquired from Syndicate death squads, with the type of blueprint awarded depending on their respective Syndicates.

The mission reward for the final mission of the A Man of Few Words quest is a Clem Clone Blueprint, which works in the same way as specters, deploying a clone of Clem to fight for you. The blueprint is a one-time use item and produces 5 clones, and like normal specters deploying one in a mission will use one of them up, regardless if it is alive at the end of the mission. The blueprint can be re-acquired by talking to Darvo in his shop and asking if Clem needs help.

Clem Clone Specters have similar AI to Tenno Specters, and will act like bodyguards.

Equinox's Duality augment for Metamorphosis creates a temporary specter armed with whatever weapon Equinox was using during casting. The specter will take the form of Equinox's opposite half (i.e. swapping to her Night Form results in a Day Form specter and vice versa), and will take into account any mods installed on the weapon it is using. The specter will only last for a set duration (modifiable via Ability Duration) and will instantly die if it walks in range of a Nullifier Crewman's bubble or a Nul Comba's/Scrambus' aura.

Duality's Specter has similar AI to Tenno Specters, and will act like a bodyguard.

The Corrupted Bombard Specter Blueprint was introduced as a Baro Ki'Teer exclusive specter, available for

‍ 50,000 between February 24 - 26, 2017 on PC. The blueprint is a one time use (providing 5x specters) and includes a Corrupted Bombard specter and an accompanying Orokin Drone. The drone does not and cannot obtain shields, nor does it provide shields to the Bombard itself. It also respawns after about 30 seconds of it being destroyed.