檢視原始碼
Click on a tile to travel to its page. 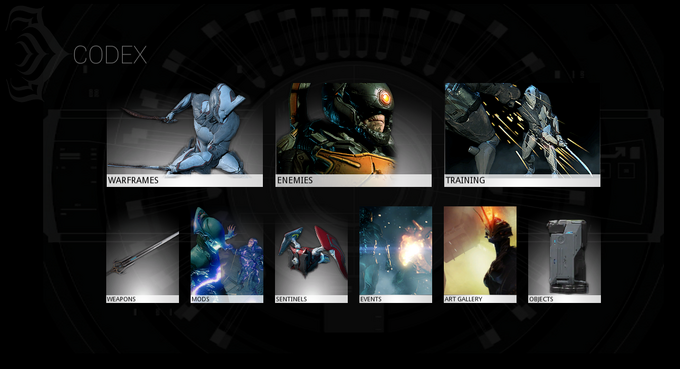 The Codex is an in-game database containing data on all aspects of Warframe. Several sections of the Codex are automatically populated as content is released (Warframes, Weapons, Events, Sentinels, Sentinel Weapons) and are additionally used to track player's progress in attaining and leveling those items.

In order to obtain information on enemies, missions and game world objects for the Codex players need to scan the relevant items using Codex Scanner.

Information for other categories is obtained by owning the item in question (Mods) or by progressing in Mastery Ranks (Art Gallery).

There is a variety of information that can be gathered on each enemy type:

The Codex displays the enemy's weakness and resistances to each damage type. Each plus or minus sign means 25%.

The number of scans needed of each enemy type for the codex profile to be complete varies between 3 and 30. 3 For bosses and high tier enemies and 30 for the lowest tier enemies (like the different types of crawlers).

The following is a list of enemy types in the Codex (sorted alphabetically) Eximus variants were added to the Codex in Update 13 and are separated from their standard counterparts:

This section is yet to be implemented. The following data is based on the information from the livestreams and is subject to change.

Missions will have a special object (mainframe or reactor) that will provide information when scanned with the data sample.

The data masses picked up in the Spy mission are planned to hold random blocks of information that will be filled in the codex once mission is complete.

There is a variety of information that can be gathered on each mission:

It is unknown if there is a bonus associated once all information is discovered.

The following world objects can be scanned to populate the "Objects" section of the codex: