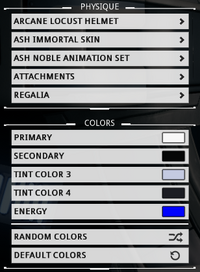 装饰物品 items are skins or accessories that can be applied to all Warframes (Excluding some Warframe-specific syndanas). These items include holographic badges, armor, helmets, sigils, custom animations, and syandana scarves. Some of them are available by default, others can be acquired through completing Events, through the Alerts system, syndicates, or purchased through the 商店 with Platinum.

All these items can be equipped in the Appearance page.

Every Warframe can be equipped with alternate helmets aside from their default one. All helmets prior to Update 10 included stat changes which altered the way that the Warframe played. The first helmet to not include stats was the Raknis Nekros Helmet. Alternative helmets can be acquired from the 商店 with Platinum or from Alerts in the form of Blueprints.

Skins alter the appearance of Warframes, including Prime Warframes, with special patterns and colors. Their colors may be changed by changing the corresponding color slot on your Warframe's appearance. They are for cosmetic purposes only. These Warframe Skins can be bought at the 商店 for

40 each, or the first eight Skins that were released for

234 as part of the Immortal Skin Bundle.The Phased Vauban Skin, the Excalibur Proto-Armor Skin and the Rubedo Rhino Skin were only distributed during special events. Check their respective articles for more details.

These items are equipped under Attachments.

Syandana are cosmetic garments, worn on the back of the Warframe that feature cloth physics, swaying to the Warframe's movement. Except for Warframe-specific syandanas like the Mortos and Valkyr's Bonds, all Syandanas can be used by any Warframe. Syandanas can be recolored independently of the Warframe's colors under the Attachments section of the Appearance tab in the Arsenal, sharing their colors with Armor. A select few Syandanas have channeling patterns on them, though most Syandanas are unaffected by channeling. Some Syandanas, such as the Misa Prime was only available via the Ember Prime Access, while the Noru Prime Syandana is available through Rhino Prime Access, and the Phased Asa Syandana was only available through the Steam Winter Sales 2013.

Armor are additional physical parts that can be attached to the Warframe's chest, shoulders and legs. Each individual part location - Chest, Left Shoulder, Right Shoulder, Left Leg and Right Leg - can be individually customized with a different part, allowing for a mixed variety of styles. Also, Armor can be recolored independently of the Warframe's colors under the Attachments section of the Appearance tab in the Arsenal, sharing their colors with Syandanas. Certain Warframes such as Banshee and Frost have preinstalled armor parts that can be replaced by these attachables. Armor have their own Channeling areas, and will glow when a Warframe is under the effects of Channeling.

Moustaches are facial cosmetics given out to all players for free in support of Movember 2014. Four of the five moustaches were each released upon Digital Extremes attaining a donation goal to the Movember Foundation, with the final moustache being unlocked on November 14, 2014. Currently they can be equipped on any Warframe regardless of gender. These moustaches can only be equipped from November 1 to November 30, 2014.

Regalia consist of Emblems and Sigils that display images of specific types of status or affiliations, such as 创建者 status, Clan affiliations and Events participation. Each Warframe can only equip one badge at a time on one shoulder.

Sigils are mainly Syndicate-related logos that can be displayed on a Warframe's body. Unlike other Regalia, Sigils can have their size, position and orientation customized. Wearing sigils also allows a player to earn Standing with the Syndicate the Sigil represents.

These badges can be acquired through participating in Events. The badge displays a holographic symbol of the specific event on the Warframe's left shoulder.

These commemorative holographic badges were awarded to the top 1000 players in the now retired Global Kill Leaderboard. They are no longer available.

These badges were given to any player who had purchased the 创建者 package. Each package provided a unique badge which displays a holographic image of the Founder type that the player is associated with.