https://www.warframe.com/droptables
CODEX
From Arlo the promise of a new life, a new form and a new word: death.

Zealot Bapitzers are followers of Arlo, the so-called 'Emissary of Eris', who have exposed themselves to the infestation in order to prove their devotion to his cause. Introduced in the fourth episode of Nightwave: Series 2 – The Emissary they are the infested form of Arlo's Devotees.

During Nightwave: Series 2 – The Emissary, the Baptizer, along with a Zealot Herald and a Zealot Proselytizer, have a chance to spawn in any non-Arena/Quest mission and can spawn multiple times in a single mission. Unlike Assassins they can spawn in Syndicate missions, Assassination missions, and Free Roam missions, and are not time-gated.

They will be marked with an extermination mark icon when in the vicinity. Despite being of the Infested faction, they are considered friendly to all normal units in the mission, including Corpus, Grineer, and Corrupted. With the exception of Invasion missions, Zealots will attack the faction Tenno is currently allied with.

This Zealot is armed with two blades, enclosing around both arms, and will rush toward to attack nearby targets. When attacked, it grows toxic explosive pustules, which are then released in an area of effect burst of damage.

Baptizer is also possessed by an infestation swarm that acts as a shield and grants invulnerability to it. The swarm can switch to other Zealots and will seek any incapacitated Zealot to revive.

Shadows Of The Dead based on the faction of the mission that they spawned in. 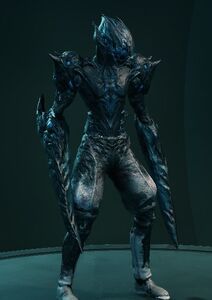