https://www.warframe.com/droptables
CODEX
Wreathed in an obfuscating black cloud the Zealoid Prelate brings Arlo's word with fire, blood and loyal Bastions who spring to his aid.
You... are beautiful.
—Zealoid Prelate

The Zealoid Prelate is an

Infested Boss introduced during the fifth episode of Nightwave: Series 2 – The Emissary. It wields the

Pathocyst Infested Glaive and, upon death, it drops one of the Pathocyst components.

Zealoid Prelate is now fought on Exequias, Deimos, as a normal Assassination target.

Pathocyst melee weapon, the Prelate has access to multiple abilities. A leaping ground slam allows it to quickly close the distance, while a long-range teleport lets it disengage just as quickly. Further, it may use a fire pulse akin to a

Virulence. An explosive Maggot acts as a delayed-detonation grenade.

In the introductory phase, there are no special mechanics. The Tenno must reduce the Prelate's health by half to trigger the main phase.

After the Prelate's health is reduced to half, the Prelate teleports to the center of the room and drains the health of nearby infested where the player has to kill the infested the Prelate is draining health from.

After catching up to the Prelate, a red extermination waypoint will point to a nearby Zealoid Bastion, which are the only units not invulnerable. Once the Bastion is killed, they will drop a lamp containing Arlo's Light marked by a blue waypoint, which strips said invulnerability within its radius. The lamp may be picked up, making the effect mobile at the cost of primary weapon use. The radius of lamplight diminishes with time but can be increased again by killing Infested within it. Should the radius become too low for a certain period of time, the lamp will break and another Bastion will be spawned.

When the Prelate has sustained enough damage (around 1/5th of its full health bar), it will force the lamp to break, blinding and knocking down any Tenno close to it, and link to surrounding Infested, rendering them vulnerable and marking them with a red extermination waypoint. After linking for a short amount of time, it will consume them and heal itself, but every enemy killed within this window will slightly damage the Prelate.

This cycle repeats until the Prelate is killed. The

Pathocyst part that it drops appears as a ? until the player completes the mission. 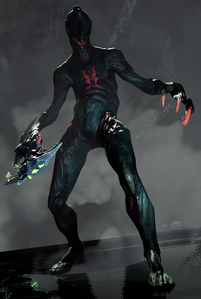