For the Boss, see Zanuka.

The Zanuka Hunter, formerly known as the Harvester, is a gray-colored Zanuka proxy controlled by Alad V. During missions, it will attack one targeted Tenno until either the Tenno or Zanuka Hunter dies. It appears rarely, in a manner similar to the Stalker. Triggering a Zanuka Hunter attack requires a player to have a Death Mark, acquired by fighting against the Corpus across five Invasion missions, or it can be summoned by using a Zanuka Hunter Beacon.

Players who have acquired a death-mark will receive an inbox message from Alad V. The text of the message reads:

If you receive another deathmark you will get this message:

Another way to tell if you have a deathmark is by pausing your game then going to your profile and you will see a section that refers to deathmarks.

The Zanuka Hunter's spawning is announced by flickering lights, much like the Stalker's appearance. Also, your screen will become desaturated and your Warframe will flicker with light.

The Zanuka Hunter has most of its speech represented by Alad V. Here is the list of his phrases:

Zanuka Hunter's main weapon is a plasma gun, similar to a MOA's. Its fire rate is much higher than a MOA, however, and its projectiles travel very accurately and quickly. The Zanuka Hunter is also capable of deploying a Frost Bomb. Any Tenno caught in the blast radius will take damage and suffer an immediate and lasting

Cold proc, making it significantly easier for the Hunter to hit them.

The Zanuka Hunter has a huge amount of shields and health. As of Update 18.5 (2016-03-04), it is immune to all hard crowd control abilities like

Radial Blind. However, it can still be affected by abilities similar to

If the Zanuka Hunter manages to lower its target's health to a low enough point, it will pin the target down and capture it, abruptly ending the mission. The captured targets will then immediately be transferred to the Recovery mission.

When a player is defeated and captured by the Zanuka Hunter, they will be automatically transferred to a hidden mission which requires the player to locate and collect their confiscated weapons and escape from the Zanuka Project facility in the Corpus Gas City in Jupiter.

This mission has been implemented since Hotfix 11.7.3 (2014-01-17). If the mission is failed, the player will have to replay the mission until it is successfully completed. See the main article for more details.

In the scenario where the quest does not automatically start, you can start it by going in your Arsenal and double clicking any captured weapon. 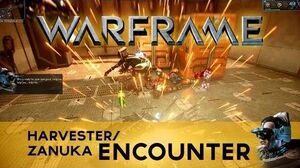 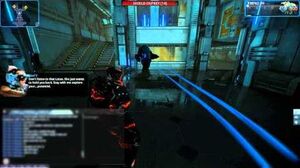 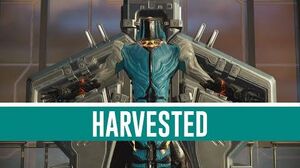 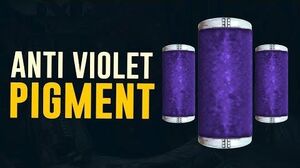