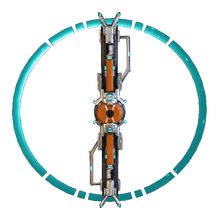 Update 28.0
CODEX
An obscure glaive weapon of Corpus provenance, intrinsically linked to Specter technology. The Xoris strikes rapidly and with great devastation. It is capable of chaining combos infinitely.

The Xoris is a

The blueprint, core, handle, and blade are all obtained during The Deadlock Protocol. Additional blueprints and parts can be bought from Cephalon Simaris for 100,000

Retrieved from "https://warframe.fandom.com/wiki/Xoris?oldid=2196280"
Community content is available under CC-BY-SA unless otherwise noted.