Please do not use this article for critical in-game information!
This article is archived.
The content was relevant to an obsolete version of Warframe, and has since been removed, retrieved, and/or revamped.
Info
Augment 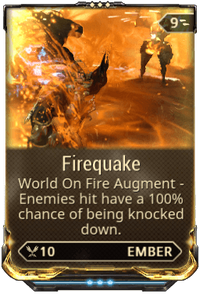 Firequake is a Warframe Augment Mod for

Ember that gives World On Fire a chance to

Knockdown enemies caught in the flames.

Retrieved from "https://warframe.fandom.com/wiki/World_On_Fire?oldid=2169443"
Community content is available under CC-BY-SA unless otherwise noted.