CODEX
The signature hammer of the only lunatic fearsome enough to bust out of the Saturn Six Max-Pen. Once loosed this formidable throwing hammer always finds its way home.

The Wolf Sledge is the signature hammer of the Wolf of Saturn Six. In addition to its high status chance, the sledge can be thrown by holding the melee button, similar to Glaives.

Wolf Sledge's main blueprint and components can be acquired as random drops after defeating the Wolf of Saturn Six. All parts are tradeable between players. 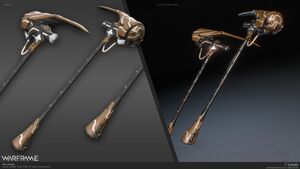