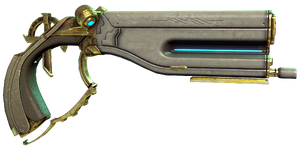 The Old War found humanity facing a technologically superior force, and their own weapons were turned against them. Melee and ballistic weapons, inspired by primitive counterparts, became part of the Tenno arsenal to circumvent the Sentient interference of more technologically-involved weaponry.

Weapons are used by Warframes, Archwings, Sentinels and enemies to cause damage. Weapons can be leveled up for more mod capacity to apply more mods and increase capability. There are three main weapon types used by Warframes: Primary, Secondary, and Melee weapons. Sentinels also have a single weapon that is leveled up independently.

Weapons in WARFRAME obtain Affinity (Experience Points) when used in combat. When enough Affinity has been obtained, the weapon rank increases, up to a maximum rank of 30 (with the exception of the

A weapon's Mod capacity is equal to the higher of either the weapon's rank or the player's Mastery Rank. An Orokin Catalyst can be installed to double the weapon's capacity, for a new maximum of 60. All weapons have 8 Mod slots, and melee weapons have an additional Stance slot, which can be used to further expand the capacity.

A new player will have the choice of 6 different weapons in the Vor's Prize tutorial, 2 from each weapon slot. Players can choose between the

MK1-Paris as their primary, the

MK1-Kunai as their secondary, and the

In this section are blueprints that require weapons as crafting ingredients (without mentioning their components). The weapons on the left side are consumed in the process of crafting the weapon on the right.

If you are wondering whether you should delete a weapon from your inventory (based on the currently known weapons available for crafting), use CTRL  + F  or ⌘  + F  to use your browser's search function to check if the weapon you wish to discard is present in the left side of this table.

Akbolto are special cases in that they are both products and ingredients on this list; be careful not to sell any of these if you want to craft them.