The true nature of the Warframes and their Tenno connection is a secret lost to the Old War. Together, they represent our best hope in turning the tide of the machine war. Warframes are unique from Dax and other Infantry, deploying dangerous and esoteric Void energy, and equipped with often mundane physical weapons – this is key to fighting an enemy that had turned our technology against us.

A mysterious weaponized armor controlled solely by the Tenno. Through the Warframe, Tenno can cheat death, channel the forbidden Void energies and face scores of enemies without fatigue. Due to apparent resistances of their Bio-Metal exoskeletons, Warframes can be safely deployed to Infestation Outbreaks, should they occur. In-depth information of the Warframe mandate is forbidden to all but the Seven.

The Warframe is an advanced weapons system used exclusively by the Tenno in their missions throughout the Origin System. The Warframes possess regenerative shields, greatly enhanced mobility, and enable the use of an array of supernatural abilities – all of which further augment the Tenno's deadly use of traditional combat arts.

Warframes are divided into a collection of diverse models, each of which personifies a great warrior spirit. Players may don the

Excalibur Warframe to gain its prowess with bladed weapons, for instance. Each model of Warframe is moreover highly reconfigurable, meaning players can tailor their choice of Warframe to fit a multitude of playstyles. While certain Warframes excel in a particular situation, none are limited to a singular role and no role demands the use of a singular Warframe.

Players customize Warframes via the installation of mods which can upgrade their Warframe Attributes, endow them with additional utilities, and even alter their abilities. Further bonuses can be achieved by equipping add-ons, such as Arcane Helmets.

Each Warframe features four unique and extraordinary activatable powers that allow for a large degree of control over the surrounding environment. (Warframes also possess passive abilities – powers which activate on their own accord.) These powers allow a Tenno to cast virtually anything, with examples ranging from devastating waves of energy to bullet-nullifying barriers or even mass healing. Warframes greatly augment the physical abilities of a Tenno as well, affecting natural skills like swordsmanship, marksmanship and, most notably, acrobatics.

New players start the game by selecting their first Warframe, from the

Volt Warframes, and playing through the tutorial. As the player progresses, they may craft or buy other Warframes from the full list of offerings.

As of Update 25.3, there are a total of 66 Warframes consisting of both original models and special variants. Only one of these special variants is exclusive to certain groups of players;

To construct a Warframe, players must first assemble each of its components. This is performed by expending resources earned throughout the game, including a copy of the part's corresponding blueprint. Component blueprints are generally obtained by completing appropriate Assassination missions, Quests, or Clan Dojo research, though exceptions exist. After collecting and assembling all of the necessary parts, players can purchase the Warframe's main blueprint from the Market with

Platinum each (Players also gain a complimentary slot for any Warframe purchased directly from the Market). Note that a player can acquire

Warframes require affinity, conventionally known in other games as experience points (XP), in order to attain higher ranks. Each Warframe levels up separately from other Warframes to a maximum of Rank 30. Note that each of the Warframe's equipped weapons have affinity rankings as well which also increase separately from Warframes. During missions, players are awarded affinity through actions getting such as killing enemies, using abilities, completing objectives or reviving downed allies.

The only exceptions are

Since Update 15.0, Warframe Abilities unlock and rank up with affinity. Maximum Rank for Abilities is Rank 3.

Some of these items are available by default, some can either be bought from the Market or found as blueprints via the Cred Offering system. They can all be equipped in the arsenal under Appearance.

The majority of Warframe abilities with duration or changes to the user/enemies will be cancelled if the player falls into a pit. (e.g.

Shadows Of The Dead, 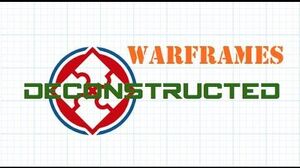 Warframe Deconstructed- Ep.1- Warframes
Add a photo to this gallery