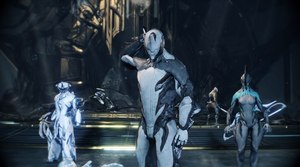 Warframe exo-armor uses unique combative technology to create the ultimate weaponry. The Warframes hold many mysterious powers and mastering one requires dedicated use.

The titular object of the game universe, the Warframe is an exoskeletal armor suit used by the Tenno to combat the sinister factions and savage mutations that threaten humanity. The exo-armor protects the wearer with regenerating shields, gives them greatly enhanced mobility, and empowers them with an array of supernatural abilities---all further augmenting the Tenno's deadly combat arts.

Warframes are flexible in nature, allowing for each type of Warframe to be tailored to fit a multitude of different playstyles. While certain Warframes excel in a particular situation, none are limited to a singular role.

Warframes can be customized via the installation of mods, which may upgrade certain Warframe Attributes and even alter their abilities. Further bonuses can be achieved by equipping add-ons, such as Helmets.

Each Warframe features four unique powers that allow for a large degree of control over the surrounding environment. These powers can allow a Tenno to cast virtually anything, ranging from devastating waves of energy to bullet-nullifying barriers, or even mass healing. Warframes greatly augment the physical abilities of a Tenno as well, affecting natural skills like swordsmanship, marksmanship and most notably acrobatics.
New players start the game by selecting their first Warframe, either the Excalibur, Mag, or Volt, and playing through the tutorial. Eventually, they may craft or buy other Warframes later in the game.

As of Update 18.5 there is a total of 42 Warframes, considering normal Warframes and their respective variants. Of those 42 Warframes, Excalibur Prime is Founders-exclusive and Excalibur Umbra is exclusive to the Chinese build of Warframe.

All Warframes can be acquired by two different ways: by crafting them with in-game materials and blueprints, or by purchasing them fully assembled in the Market.

Every Warframe is comprised of three parts and a main blueprint:

To acquire the parts of the desired Warframe, players have to first obtain the blueprints of the parts by completing various Assassination missions, Quests, or Clan Dojo research. Some unique warframe parts can be collected at Sorties, or in some unique missions. After each part has been built in the Foundry using various resources, players can then purchase the Warframe's main blueprint with

Credits from the Market to complete the final construction process. Note that

Orokin Reactors do not come installed with player-built Warframes.

Warframes can also be purchased in the Market with

Platinum. Any Warframes acquired in this manner come with a pre-installed

Orokin Reactor and their own slot.

Warframes require affinity, conventionally known as experience points (XP), in order to attain higher ranks. Frames rank up separately from others and from the player to a max of Rank 30. During missions, players can be rewarded XP through actions getting such as killing enemies, using abilities, completing objectives, reviving downed teammates or simply completing the mission. With each successive rank, a Warframe gains mod capacity and passive increases to health, shields, energy capacity, and 200 mastery points. Status boosts received from ranking up are calculated from the base value of the Warframe for each status, preventing modules from affecting the bonus.

Since Update 15, Warframe Abilities unlock and rank up with affinity. Maximum Rank for Abilities is Rank 3.

Some of these items are available by default, some can either be bought from the Market or found as blueprints via the Alerts system. They can all be equipped in the Customize Colors page under Select Skin.

The majority of Warframe abilities with duration or changes to the user/enemies will be cancelled if the player falls into a pit. (e.g. Shadows Of The Dead, Invisibility, and Iron Skin)