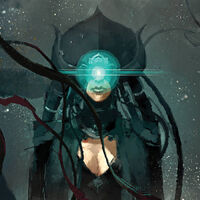 The Warframe Soundtrack is the first official soundtrack featuring 24 background music and themes songs up to Update 19: The War Within.The album was initially released in vinyl format on iam8bit and was later released digitally on July 5, 2017 on Bandcamp.

The songs can be collected and listened to in-game through the Somachord on the Orbiter.

Retrieved from "https://warframe.fandom.com/wiki/Warframe_Soundtrack?oldid=1678493"
Community content is available under CC-BY-SA unless otherwise noted.