星际战甲 (lit. "Galactic Armor"), commonly referred as Warframe China, is an alternative build of WARFRAME developed by Digital Extremes and published by ChangYou on PC and Perfect World on the PS4, targeted specifically for Mainland Chinese players. While the game is virtually identical to the global counterpart, most voice-over quotes are dubbed in Mandarin Chinese and patches offer slightly different content that are usually months behind global but allow earlier access to Chinese themed items.

While residency inside Mainland China is not required to play Warframe China, players must be able to provide Chinese ID credentials (excluding Hong Kong SAR, Macau SAR, and Taiwan) in order to register for a ChangYou account to gain access to the game. A Mainland Chinese cell phone number was also a requirement for two-factor authentication to participate in Closed Beta prior to September 25, 2015 Open Beta launch.

On PC, Warframe China and its global counterpart share the same AppData folder, hence they cannot be installed alongside each other on the same Windows partition using conventional means. Attempting to install both versions of Warframe on the same computer will render both games unplayable, even when the "Verify" feature in the launcher is used.

One workaround is to backup the files in the AppData folder and restore the files belonging to the version of Warframe that the player wants to play next or to install one of the Warframe versions on a separate Windows user account.

Updates in Warframe China are approximately one month behind global console builds and three months behind PC. Story and mechanics are identical to Warframe global, with the only exceptions being item release dates, economy, and languages. 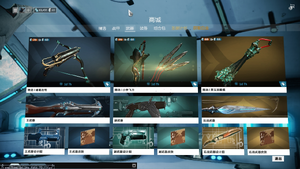 Items that are exclusive to Warframe China as of most recent update includes:

For all currently known Chinese exclusives, see Category:China only content.

While the cosmetics of TennoGen can be linked in the in-game chat, it is not available in the Chinese build version, however in late 2018, in conjunction with the Chinese build's connection to WeGame, the TennoGen global version became available. 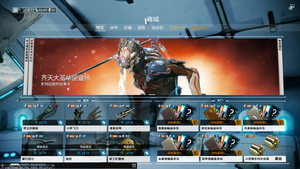 Platinum in China are sold 1:1 using Renminbi[4]. Warframe China tends to value in-game items differently compared to the global build, where items of the same type would sometimes differentiate greatly in value. Omitting various discounts and bonuses, a Wukong

8 for Profile Icons), while a typical Warframe such as Mirage

80, which is valued at around 22.05 USD and 12.60 USD respectively. In contrast, Mirage in the global build would cost players 275 Platinum

Boosters in Warframe China do not have duration, but a number of missions that the booster will take effect. For instance, a player who purchased 10 charges of Credit Booster will be able to boost their

Credits earnings in the next 10 missions. Purchase options are limited to 10 or 100 charges. However, boosters gained from Rare and Reinforced Storage Containers will function as 30-minute boosters. 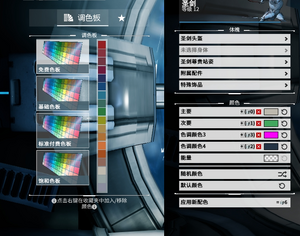 Until Oct 25, 2016, Color Picker Extensions were not sold as a set in Warframe China, but instead sold per single color. When coloring their gear, players could choose from four color palettes: Free, Basic, Standard Paid, and Saturated, where each color in the palette set costed 0 Platinum

Unlike the global build where Grineer and Corpus have their own spoken languages, a majority of enemies quotes in missions, cut-scenes and Landing Craft radio in Warframe China are dubbed in Mandarin Chinese. 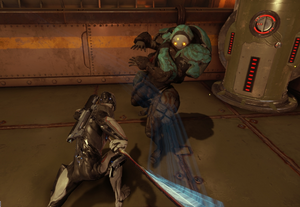 Option to toggle gore does not exist. While blood is still visible in-game, dismemberment effects are disabled.

Warframe Voice part 3
Add a photo to this gallery

Retrieved from "https://warframe.fandom.com/wiki/WARFRAME_(China)?oldid=2189408"
Community content is available under CC-BY-SA unless otherwise noted.