https://www.warframe.com/droptables
Vulcan Blitz is a

Jat Kittag-exclusive mod that causes enemies killed by the Jat Kittag to explode, dealing a flat amount of

Blast damage plus a percentage of the enemy's maximum health in an area of effect. 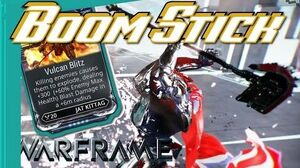