Once Awake
Not Replayable

After centuries of sleep you are awake. Your Warframe armor is weak. Your skills all but forgotten.

A Grineer General, Vor, stands over you. "You are mine, Tenno!"
—Quest Description

Vor's Prize is the second main storyline quest that occurs immediately after Awakening, designed to guide new players through the game so that they can familiarize themselves with the various systems involved. It was introduced with Update 14.0 (2014-07-18).

Continuing with their efforts to stop Captain Vor, the newly awakened Tenno travels around Earth, looking for parts to repair their Orbiter ship with. With the help of ship Cephalon Ordis at the helm, they manage to rescue a Corpus black marketeer named Darvo who was imprisoned by the Grineer for being sympathetic to the Tenno cause. Darvo helps the Tenno retrieve ship segments that unlock basic functionality such as Market or Foundry access.

In the end, the Tenno successfully disables the Ascaris device, freeing them from Vor's control. However, the device has an anti-tampering failsafe that will cause it to detonate if it is not disarmed. They then seek to assassinate the captain, defeating him on a mining asteroid off Earth's orbit, ultimately disarming the Ascaris device.

The Lotus counts on the Tenno to travel across the Star Chart to bring balance to the Origin System from the dominating forces of the Grineer and Corpus factions.

Interlude I: The Orbiter, Earth Orbit

With the Liset ship and a handful of weapons at the ready, the Tenno is introduced to their own personal Orbiter ship, along with the Arsenal system (after restoring its functionality) only to find that it has been looted and that the vast majority of the Orbiter's systems are offline, their module segments having been removed or damaged. The Lotus recommends that the Tenno prioritize repairing the ship's Communication system so that they may further arm themselves and (optionally) coordinate with other Tenno. There are no replacement components available aboard the Orbiter, but she has located a suitable replacement on the surface of Earth.

The Tenno deploys back to Earth, with the intent of retrieving the Communications module from a Grineer outpost. This short mission introduces the Spy game mode (this was previously Interception); the Tenno must break into a Grineer Data Vault and hack the console to retrieve the module. Once this has been done, the Tenno returns to the Orbiter.

Upon completion, players are rewarded with flawed versions of the

With the Communications module segment in hand, the system can be restored. This allows access to the Market and enables Matchmaking functionality. Ordis mentions that the Tenno can now contact arms dealers (though in somewhat less flattering terms at first, given his unstable nature) to expand their arsenal. Whilst it seems there are no merchants currently available, the Lotus has located a captive arms dealer on the surface who might be sympathetic to the Tenno cause.

Returning again to the surface, the Tenno sets out to rescue a Corpus black marketeer named Darvo who is sympathetic to the Tenno cause — and has been imprisoned by the Grineer as a result. During the course of the mission, the true purpose of the Ascaris becomes clear; it is designed to allow Vor to assume control of the Warframe. Vor (now demoted to Captain for his failure) demonstrates partial control of the Warframe systems by temporarily halving the Tenno's maximum shields, similar to the effect of the Cryogenic Hazard, but cannot yet assume full control.

Players are rewarded with a flawed 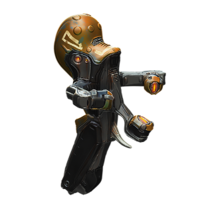 Upon escaping, Darvo rewards the player with an Ascaris Negator blueprint — An item to negate the effects of the Ascaris Vor installed.

However, the orbiter's Foundry systems are inoperative and must also be restored. The Lotus has located a neutral mining colony where they should be able to obtain the equipment they need with potentially no bloodshed or violence.

The Tenno also recovers the Mod system segment in the process of rescuing Darvo, and now has the ability to install any mods retrieved during prior and following missions — most of which will be the special 'Cracked' or 'Flawed' variants that are inferior to regular drops, but provide new Tenno with the vital tools they need to survive. Ordis encourages the Tenno to install some modifications so they are better prepared, somewhat eagerly recommending the use of

Heat weaponry — another sign of his instability after being abandoned for so long.

Redirection mod is automatically given to players upon restoration of the Mods segment.

Arriving at the mining outpost, the Tenno and the Lotus find that there are no signs of colonist activity any more — only Grineer soldiers. The Lotus deduces that the Grineer have invaded, and directs the Tenno to first retrieve the Foundry module, then Exterminate the remaining Grineer so that the lost miners are avenged.

Heated Charge, and a normal

Fury mod is rewarded upon completion.

Foundry module secured, the Tenno returns to the Orbiter and installs it. With the Foundry systems once again online, they find the ship's supply stores were also looted by the Grineer. Now the Tenno must find materials so that they can manufacture the Negator using the blueprint Darvo supplied. Ordis sends Darvo a somewhat impolite message; Darvo replies quite promptly, apologizing for the misunderstanding, and directs the Tenno to a series of Corpus Supply Caches where they can gather the materials they need to manufacture the Negator.

Following the coordinates sent by Darvo, the Tenno finds a series of Corpus outposts built into the upper levels of the Himalayan Mountains. The Lotus has identified three Supply Caches which should contain the materials necessary to produce the Negator. During the course of the mission, Darvo briefly introduces the Tenno to the Corpus and explains that whilst the mission is technically stealing, the Corpus aren't exactly beacons of moral fortitude either — given that they'll sell anything to anyone. Darvo sees their willingness to deal with the Grineer as unforgivable and is all too happy to support the Tenno in their efforts against the Corpus and the Grineer as a result.

Unfortunately, it also appears the Ascaris' work is almost complete. The Tenno loses contact with the Lotus and Darvo during the mission, as Vor shows he can now interrupt transmissions fully, rather than simply force you to receive his own messages. He states that the Tenno will soon return to him instead of the Lotus, over their own free will.

Completing this mission will give flawed

With the resources for the Ascaris Negator ready, the Foundry is put to work and the Ascaris can be removed. Vor manages one final transmission.

What a waste.
—Vor

Moments later, the Tenno is briefly incapacitated. The Ascaris has an anti-tampering failsafe and has burrowed deeper into the Warframe. It will soon detonate — with predictably lethal results — and the only way to disarm it is to find Vor. The Lotus locates a nearby ship that should have information on Vor's location, and the Tenno departs immediately.

Boarding the Grineer Galleon, the Tenno immediately sets out to retrieve a navigation segment held within a storage cell aboard the ship. Once retrieved, the segment can be made compatible with the Liset's systems, allowing the Tenno to discover the location of Captain Vor in order to confront Captain Vor.

After retrieving the segment, the Tenno is faced with a challenge. The Galleon is on a direct course for a convoy full of innocent colonists. Do they intervene on the behalf of the colonists by destroying the Galleon's reactor (thereby causing the Galleon to self-destruct) or do they extract immediately? No matter the choice, the Ascaris again demonstrates partial control of the Warframe systems, halving the Tenno's maximum shields.

If the Tenno chooses to save the colonists, the Tenno has 5 minutes to evacuate before the Galleon explodes upon disabling the reactor. The Lotus ultimately thanks the Tenno for their actions, but reminds them that they must survive in order to protect the system.

Intensify mod are awarded upon completing the mission.

After installing the navigation segment, the Tenno can head to Cambria, Earth for the final confrontation with Vor.

Captain Vor has been located on a mining asteroid — and best of all, he is without his elite guard. It is the perfect time to eliminate him. The Tenno finds and confronts him. After a short battle, Vor is dead, and the Ascaris and its detonator have disintegrated.

Completing this mission will complete the quest.

Epilogue I: The Orbiter, Earth Orbit

The Tenno is free — but the battle has only just begun. The Lotus immediately sent the Tenno a message, ordering them into a conquest to save the Origin System, one of which the Tenno must decide themselves.

Now that you have freed yourself from Vor and his Ascaris, you have a new mission, one of your own making. Know that I am only your guide, you are your own warrior, you decide what battles to fight. Allow me to suggest a course of action:

Seek out like-minded fighters, Tenno are more effective in groups.

Execute missions and alerts on the Star Chart to open new paths of exploration.

Use the credits you earned in battle to buy blueprints in the Market, then hunt down resources and craft those items in your Foundry.

Customize your weapons and Warframes using the Mod bench. Different enemies are vulnerable to different combinations of mods, experiment to discover the most effective loadouts.

Finally, stay alert. The Grineer and Corpus are tireless and you are the only thing standing between them and total domination of the Origin System.

I am counting on you, Tenno.
—The Lotus

After reading the message, an end screen diorama will appear along with Vor's personal excerpt, providing a background story of his very first encounter with the Tenno in Pluto, in a mission to purge them before they are strong enough to fight back.[1]

You were right, the Tenno threat is real. We found one drifting near Pluto but the Lotus knew we were coming. She purged the Cryo moments before we had them and sent a squad of Tenno to break our assault.

They escaped. We are working on tracing them. Separate this Tenno from the flock and it should be easy to kill. We shattered its Warframe and expect such an abrupt Cryo purge will have damaged its memories.

We anxiously await punishment for failing this task. 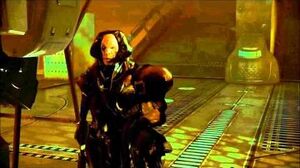