Volatile Runners are orange-colored Infested Crewmen with explosive properties. Volatile Runners will charge the nearest player or objective and detonate themselves after a short delay, dealing damage that scales with level that will stagger the target. They can also throw balls of Infested mass at their enemies that they cannot reach normally.

Visually, a Volatile Runner is one of the least disfigured of the Infested types, alongside Runners and Leapers, with most of the Crewman's form still intact as well as most of their suit. However, one leg has dissolved completely and replaced with an Infested stump, as well a missing finger on the left hand. Most notably, however, is the right arm which was attached to the head and then fused to the body by an overgrowth of Infested mass, with a tentacle acting as its replacement. The Volatile Runner's model is identical to the Leaper's, the only difference being the orange color. 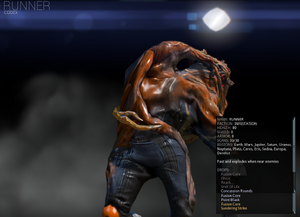 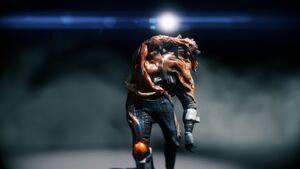 A Volatile Runner, as seen in the Codex

A Volatile Runner Throwing A Projectile