Update 29.0
CODEX
Nothing fancy but gets the job done and then some. With its electrified armor, this rough and ready mech can make the battlefield treacherous for the enemy with an arsenal of explosives.

The Voidrig Necramech is a frontline-purpose Necramech design, capable of handling both offensive and defensive actions with ease with its heavy armor using explosive weaponry and potent defensive abilities. It comes with the

Component blueprints for the Voidrig are available for 2,000

‍2,000 from the Necraloid Syndicate at Rank 1 - Clearance: Agnesis, while the main Voidrig blueprint is available for 5,000

‍5,000 at Rank 2 - Clearance: Modus. When levelling the Syndicate, one Voidrig blueprint is offered for free.

Crafting the components additionally requires Rank 1 - Outworlder with Solaris United and Rank 2 - Visitor with the Ostrons in order to acquire Venerdo Alloy and Marquise Veridos required in its construction.

Damaged Necramech components, Marquise Veridos, and fully built Voidrig components can be traded between players. Trading gems or for fully built components will bypass the rank requirements for Solaris United and Ostron.

The Arquebex are a pair of heavy energy mortars of Entrati design, functioning as the Voidrig Necramech's built-in Exalted Weapon. It can only be utilized through using the

Guard Mode ability, which will bunker the mech down in a siege-mode to compensate for the recoil. 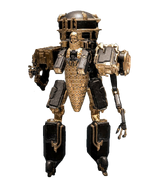 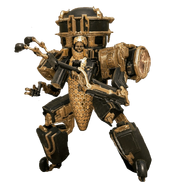 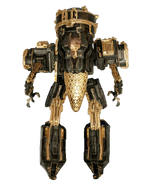 Retrieved from "https://warframe.fandom.com/wiki/Voidrig?oldid=2198922"
Community content is available under CC-BY-SA unless otherwise noted.