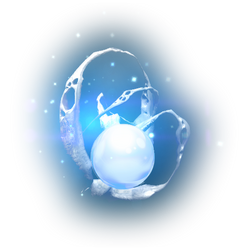 Void Traces are primarily obtained by collecting Reactant, which occasionally drops from Corrupted enemies (including those who turn Corrupted during the mission) provided there is a Void Fissure present. Reactant is collected to crack open a Void Relic, but Reactant will drop regardless, whether the player has a Void Relic equipped or not.

Players can collect up to 10 Reactant during each round of the mission. 10 Reactant are required to open a Void Relic, if one has been equipped prior to the round starting. Once enough Reactant is collected, 6-30 Void Traces are added to the reward pool, and the contents of an equipped Relic will be revealed at the end of the current round. Additionally, a player can receive 5 bonus Void Traces should a teammate choose their Relic's artifact, which is much more likely should a particular relic yield a rare reward. As there are up to 3 additional teammates, thus up to 15 bonus Void Traces can be collected by this method in each round of the mission, as an incentive for players to refine their Void Relics prior to equipping them. As with most other rewards, all rewarded Void Traces and chosen Relic artifacts are added onto the players account at the very end of the mission, if it is a success.

The theoretical maximum is 7,695 Void Traces from one Relic; however the odds against having 5 Charm Resource Buffs active when cracking a Relic are astronomical, as even having 2 of them active at once is rare. On top of that, the maximum Void Trace storage is currently capped at 1,500 Void Traces with MR 28.

Hotfix: Specters of the Rail 6

Retrieved from "https://warframe.fandom.com/wiki/Void_Traces?oldid=2059674"
Community content is available under CC-BY-SA unless otherwise noted.