A Vitruvian is an Orokin recording device. One of these said devices plays a key role in The Sacrifice, containing recordings of Ballas detailing the creation of the Warframes, the Sentient's betrayal, and the Tenno.

The Operator builds Excalibur Umbra, only for him to display sentience. They discover that Umbra's memories contain the keys to unlocking the Vitruvian.

The Vitruvian contains lore regarding the Old War. After the Sentients were sent to terraform the Tau System only to gain sentience and were led by Hunhow to betray their creators, the Orokin cultured the Infested to be used as soldiers. However, when the Infested prove to be uncontrollable, the Orokin built Warframes, which are revealed to be Orokin soldiers infected by a unique strain cultured by the Helminth. However, the Warframes too proved to be uncontrollable until the Zariman survivors were used to inhabit the minds of the Warframes, hidden on Lua. It is then revealed that Ballas intended to send the Vitruvian to Hunhow and disclose the location of the Operators as part of a mutiny following the death of Margulis, but warns him to not underestimate the "devils" that were able to calm the Warframes.

It is with the greatest of risk that I commit this recording. The codices within reveal the hidden weakness of your most feared enemy. My creations. My Frames of War.

What led us here? You did. You vile blasphemies. Machines... thinking... breeding... You were to bear us a new, promised land. But when you arrived at that distant world... you knew that in time, we would bring ruin to it as well. As we had to Earth. And so it was... we came to war.

Our hubris shone like a black star... for our technology, our war-machines were your kin. How easily you turned them against us. We were forced to older means. Not circuits, nor light... but flesh and disease. Our horrors past, our ravaged outer colonies... became gardens! We cultured the Infestation, conceiving of a hybrid. Transformed, but only just. The 'Helminth' was created, born to yield these new warriors, worthy of battle against you. The great and terrible Hunhow. We took our greatest, volunteers or not, and polluted them with these cultured reagents. They transformed. They became Infested... ... but only just. Their skin blossomed into sword-steel. Their organs, interlinked with untold resilience. Yet their minds were free of the Infested madness. Or so we thought. We set them upon the battlefield, bio-drones under our command. The Warframes... All of them... failures. Surprised? They turned on us, just as you did. And so we had no choice but to commit them to grave. This is all you know, Hunhow, but there is a hidden half, a secret, that lies within a place forbidden to you and your kind. I speak of the Void.

Before the vain faith - our people held Dualism as truth. That all things were of two parts. Mind and body. Consciousness and matter. Of our world... and the Void. It was from there that our answer finally came. Distorted by vague horrors, we kept the Zariman survivors within a secret Reservoir. They were the missing half. Transference-linked: the Warframes, the body - and they, the mind. I give you now the coordinates and codes to this place. But do not underestimate these devils, Hunhow. They did what we could not. We had created monsters we couldn't--

--We had created monsters we couldn't control. We drugged them, tortured them, eviscerated them... We brutalized their minds... but it did not work. Until they came. And it was not their force of will - not their Void devilry - not their alien darkness... it was something else. It was that somehow, from within the derelict-horror, they had learned a way to see inside an ugly, broken thing-- And take away its pain. 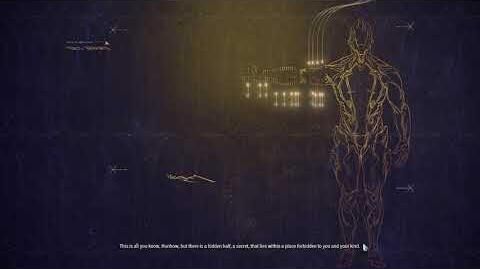