CODEX
The sword the fabled Orokin executioner Nihil used to glass the condemned. Swing while Aim Gliding to glass enemies. A Ground Slam will smash nearby glassed foes, while sending forward a narrow shockwave to shatter distant ones. A Heavy Slam sends forth a wider shockwave with greater force.

The Vitrica is Nihil's signature heavy blade, used to judge and vitrify enemies throughout the Origin System during Nightwave: Series 3. It is a heavy blade capable of emitting a blast that glasses enemies with an Aim Glide attack and can shatter them with Slam Attacks.

The Vitrica's blueprint is obtained after defeating Nihil in Nightwave: Series 3, Episode 5.

60x Cred each, and the former can be traded between players. Once the Oubliette decoration is installed in the player's own Orbiter, interacting with it with the Key in the player's inventory will trigger the boss fight with Nihil. 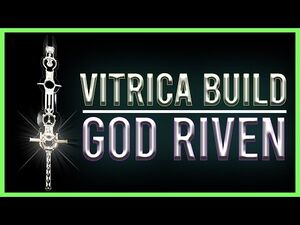