Varzia Dax is a former Dax soldier who now resides in Maroo's Bazaar as a vendor to provide Primed items to the Tenno. 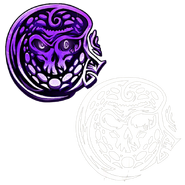 Varzia was a surviving Dax soldier of a Sentient invasion on Lua during The Old War[2], shown trying to avoid falling structure in a cave under Lua. She had an encounter with the humanoid Sentient Erra, who tried to finish her off by crushing her head with his bare hands. Natah, Erra's sister, as the Lotus at the time, arrived on the cave, accompanied by a group of Tenno, and ordered Erra to let go of Varzia. Erra was horrified to see his sister viewing him as an enemy, blaming the Tenno for making her turn against her family, but he, nonetheless, let go of the Dax soldier. The Tenno defeated Erra, and Varzia was saved. Her helmet was damaged in the process.

After the end of The Old War and the fall of the Orokin, Varzia got tired of combat and has chosen to use her familiarity with Orokin technology to reinforce Tenno Arsenals, and is residing in Maroo's Bazaar as a vendor.