Vala Glarios/Quotes
Captain Vala Glarios. So pleased to meet you. I should have expected Tenno rats among the flotsam. Sequester that Railjack for Parvos!
—Vala Glarios

Vala Glarios is a Corpus captain who serves Parvos Granum and is embarking on a revenge mission against the Tempestarii Ghost Ship.

I was working in an exosuit when the Tempestarii destroyed Lucretia Platform. I drifted for days among the frozen fragments of my crew. My Sisters. I dreamed their dead, gaping mouths were singing with me yet.
—Vala Glarios

Vala was the sole survivor of an attack from the Tempestarii, an Old War rescue Railjack, on the Lucretia space station. She drifted for days in her exosuit amongst the fragments of her dead crew, dreaming that her "sisters" were singing, leading her to seek revenge against the ship, now lost to the Void Storms.

Cephalon Cy and the Tenno investigate Corpus scavengers in the Veil Proxima, where they are greeted by Vala. Shortly after, the Tempestarii emerges, repelling both the Tenno and the Corpus. The Tenno escape to raid Corpus logs to find out what they know about the Tempestarii.

The Tenno appease to the Tempestarii's calls, allowing Vala to capture it. The Tenno destroy Vala's beam generators before using the Tempestarii's ordnance to banish Vala into the Void, who swears to be avenged by her sisters. She wakes up in the Granum Void and collapses, where she is greeted by Parvos Granum who extends his golden hand to her.

Parvos Granum, having desired for a reliable sister in the past, recruits Vala Glarios as his right-hand woman. She is put in charge of selecting and growing Candidates for his new army, the Sisters of Parvos. 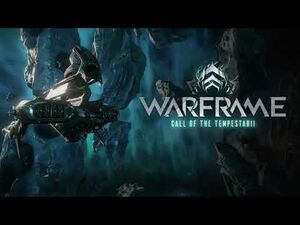