Vacuum is a Sentinel mod that pulls in Pickups, Ammo, and Mods toward the Warframe from farther away.

“My Vacuum page, what have they done to it. Fix this!”
This article is in need of a clean-up. You can help out the wiki by re-organizing parts of the article, checking grammar and spelling to improve the article.
* Reason: Need confirmation on old mechanics still existing after H24.0.2 changes to Vacuum 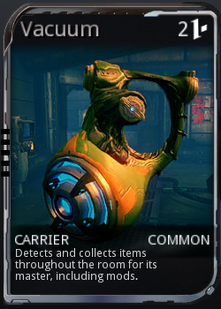