WARNING This Guide is out of date. In Hotfix 17.0.4 Pilfering Swarm was nerfed to no longer be affected by power strength. You can just skip to the Comparison to Nekros section but substitute Hydroid's total possible loot to 200%. Kill speed can go up somewhat now that you don't actually need to kill with the tentacles, but they remain unreliable because you have to tag the enemies with the tentacles while they are alive to affect them. Pilfering Hydroid is now just a worse Nekros and as such much less useable. Of note, Hydroid still stacks with Nekros. You can profitably take both on a farming group, but now Hydroid is the second choice.

The only obvious exception is Oxium farming, because Oxium Ospreys do not leave corpses and so cannot be desecrated.

An outdated guide to degenerately playing a Warframe I don't like all that much. This strategy applied to versions of Warframe before Update 17.0.4.

Hydroid has seen a resurgence in high level play entirely due to his Warframe Augment mod Pilfering Swarm. A loot increasing augment that is boosted by power strength mods allows access to mass amounts of drops from weaker enemies.

This ability doesn't do a huge amount of damage. The crowd control is not very reliable and can fling enemies to inconvenient places, or fail to pick up enemies that waltz through. On cast the tentacles spawn under enemies in range and do emergence and contact damage immediately. For the duration of the ability enemies that run into an unoccupied tentacle will be grabbed and suffer constant damage, but this is the erratic part. We want to emphasize the reliable emergence damage to make the ability as close to a single hit of area damage as possible.

These 6 mods at or near maximum rank are almost necessary and form the core:

Choose 2 of these, depending on the situation: 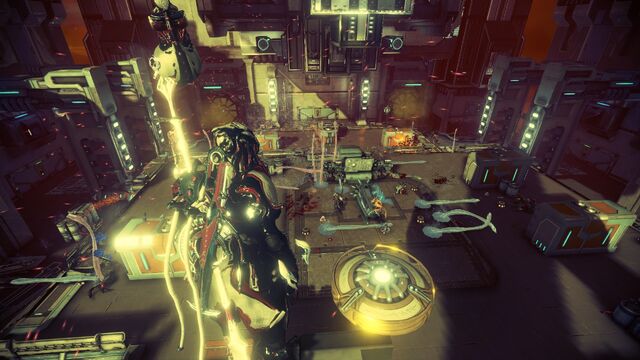 This is the main purpose of Loot Hydroid.

A quirk of this method is that non-Tentacle kills are a waste:

Dark Sector Defense provides better results than the equivalent Survival missions in my experience. I used common resource droprates to make the comparison assuming they will show less variance and are proportional to rare resources. That assumption might not hold but anecdotally I also have received more rare resources in DSD.

The known abilities to benefit Tentacle Swarm are Rhino using Roar, and Equinox using Provoke. These will speed up your farming and push you to higher waves. Equinox is supposed to increase power strength but preliminary testing indicates Provoke only increases damage and does not increase the extra loot.

Finally, the obvious teammate for more Tentacle Swarm damage is another Pilfering Hydroid. Double down.

This Hydroid build is energy intensive. It should more than pay for itself on average, but a stretch of bad luck on orb drops can see you run empty. The preferred solution is Energy Vampire from Trinity, allowing infinite spam from a safe location. Alternatively a second Hydroid to spell you, or a Nekros to produce a few additional orbs and more loot besides. Failing this, occasional Energy Restores: you have to spend Nano Spores to make Nano Spores.

With the lamented demise of Greedy Mag, the scattering of mod drops everywhere decreases efficiency and safety of this method by forcing you to "actually play the game" and such nonsense. Using a large Vauban Vortex in a chokepoint can help, or if facing Grineer or Corpus you can make them come to you with Loki's Radial Disarm. 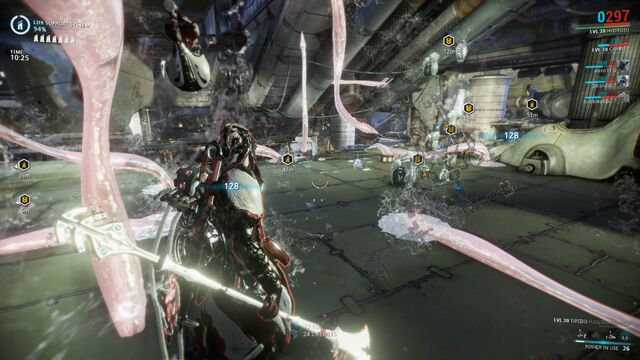 Hydroid is an excellent support in any survival, generating large amounts of extra life support modules (or excavator batteries).

Even in Tower 4 void survival where Nullifiers abound and heavy units will soon survive a casting of Tentacles, you will still be killing the normal units well into two rotations. Hitting a group of mooks produces a shower of life support, making running out of air all but impossible even with a weaker team.

Despite Nekros in high level play picking up a powerful new combat medic role with his own augment Soul Survivor, the former Loot King has lost a lot of equity to a well-geared Hydroid.

Nekros generally provides ~+80% more loot from all corpses. A Nekros farming strategy involves the other members killing as fast as possible. Obviously much faster than Tentacle Swarm alone can manage, especially with negative power Speed Nova available. But when accounting for delays waiting for the next wave of enemies to spawn (especially in Defense or Survival) the Hydroid method getting more than double the raw loot per kill pulls ahead. Alternatively you can gather enemies with Loki's Radial Disarm and use stealth melee bonuses and slash weapons for a high dismemberment rate. Each body part can then be Desecrated, but this is slower.

Though nothing says you can't take a Nekros in your Hydroid farming group if you have a free slot.

Note: In long runs of high level survival Nekros provides steady amounts life support as the enemies get harder, and also health orbs which can't hurt. Hydroid's contribution will dwindle as the Tentacles kill less and less. For a simple ducat run of 40 minutes or less, in my opinion Hydroid is superior. But if you're trying to make the leaderboards, Nekros is still the man.

Retrieved from "https://warframe.fandom.com/wiki/User_blog:Raisins/Hydroid:_Tentaclespam_Lootmolester?oldid=1080968"
Community content is available under CC-BY-SA unless otherwise noted.