Hello! If you are like me, Captura is an essential tool for editing together parody videos for Warframe, as well as simply getting cool shots of weapons and enemies for thumbnails. I recently discovered a way to bug out the Captura camera and force it to spawn inside of the boundary Warframes normally have, that prevents the camera from getting too close. Not only does this allow you to place the camera through your Warframe to get shots at almost any angle, but this allows you to position the camera in such a way to allow "Pov" shots with weapons. This will be a short guide on how to do this, as well a video tutorial on how to do so, and sample videos that i made with pre-made green screen ready clips for you to use right now.

To start, you do not need the Color Key room from Cephalon Simaris in order to bug out the camera, but this room will allow you to green screen video clips of your firing and reload animations, so you can use it in parody videos and stuff like that. You will also need colors from packs that are very vivid and rich, such as the blue or green colors from the Infested color pack, although any color will do as long as it is sharp and does not match any colors that your Warframe or weapon has. The sharper the color, the easier it will be for your editing program to "key out" this background and make the image more crisp.

You can either watch my quick video down below, or read my quick text only tutorial on how to make this work.

Before you can do any pov work, you need to make sure you understand what is going on and begin to easily replicate it yourself. Your Warframe character (as well as most enemies) have physical barriers (such as a collision mesh) that prevents the camera from going too far at the character or prop. Because the camera is forced to move closer if an object somehow manages to get between you and your Warframe (in this case, the wall does not allow the camera to move back any farther even though you can), this will cause the camera to spawn within this boundary if done correctly. You will immediately know you have done it right if you can successfully move the camera into your Warframe itself. Just be careful as the boundary walls still exist, and while the camera can move around while inside, going to far out of the model will make the camera collide with the barrier and not allow you to go inside again, forcing you to restart the method.

Now that you know you can replicate this glitch, you are ready to begin working on recording your video clip or simply snapping a picture. Because automatic or continuous weapons continue to fire if you go into the camera mode, this is the only easy way to record footage. In other words, except for a tricky method i will soon describe getting firing and reload animations only really works for automatic weapons, such as the Braton. It will continue to fire and reload endlessly as you advance time, a perfect opportunity to make adjustments, as you progress time in small bursts to look for any clipping of your Warframe. Speaking of which, using a blank nova with no attachments or sigils is the best option, or any Warframe that is thin and has a low profile. During reloading the camera stays still, so things like shoulders or helmets my clip into the scene if they are too big, so keep that in mind.

You can also tweak the Field of View settings in the captura menu up or down to keep your distance the same but allowing more of the weapon to be in view. Or less, if this is what you prefer. Most reloading animations will also occur off-screen to the side or to the bottom left (in the case of most dual wielding weapons) and while some iron sight views are possible with careful positioning, bullets seem to shoot to left of the gun rather than straight, so it may appear unrealistic in a video.

As i mentioned, it is more difficult but not impossible to get shots of a single trigger pull of a non automatic weapon, such as the Arca Plasmor which might add, has a very nice firing animation. You will lose a few of the first frames of the animation with this method, but it is the only realistic way of doing PoV video with non-automatics. This will require a bit of editing, but shouldn't be too hard for anyone even with basic editors. First, get ready to fire the weapon of your choice by going into the menu and setting it to slow motion at the slowest setting (which is default), then exit the menu. Tap your fire button very quickly and immediately go into the menu again at the same time, then position the camera into your Warframe like normal and get the angle just right.

Now turn the slow motion setting Off, and record the weapon firing while keeping a bit extra time on the recording so it appears smooth. Now, get out of the menu and fire the weapon normally once, this shot is so you can record the sound of the weapon that you will be mixing in a video editor with your original PoV clip. Some video editors will allow you to place the video file under or above the other one and remove the video portion, leaving only the audio, but if yours doesn't (such as windows movie maker, which also does not green screen though i might add) simply convert the video file with an online conversion program to .wav or another audio file and mix it that way. Be sure to mute the original PoV clip in preference over your new audio file instead, and be sure to have music turned off for obvious reasons.

Because automatic weapons will begin to fire again immediately after reloading, it is not possible to make a shot where you fire the gun then stop, without the gun freezing as you must stop the video file. To get around this, assuming you are making an action shot for a parody or something, simply cut the video short but leave a slight bit of the audio and allow it to fade out quickly, as you change the scene to the reverse shot or simply another shot. This way, you can still give the appearance that you shot the weapon and killed something or whatever, while still hiding the fact that the firing never actually stopped. Another trick that may be more difficult is Aiming your weapon and recording several minutes of this, then in an editor make movements to the file to appear that the character is running (like the first Doom style) although this would require more advanced editing and should be done only if you already know how to pull this off.

Conclusion, Uses, And Free 'Packs' You Can Use Yourself

In conclusion, this is a way to get shots and angles in Captura you normally would never be able to do, allowing you to get even more cinematic shots and PoV angles. As for it's uses, this could be helpful for parodies or thumbnails that require the camera to be on the ground and pointing up, Pov shots of a weapon being used on an enemy, or be used in a semi-professional way to create action movies that are based on a first person view of Warframe. In any case, i have a few "packs" below that you can download using any youtube downloader, that are ready to use for your own use in your editor, although the files are not full HD or anything. I have tested them and the green screening will work just fine however.

Until DE allows us to give us props, more camera tools and positions, and complex Ai controls, this is the best we can do for now. Thanks! 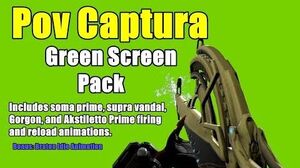 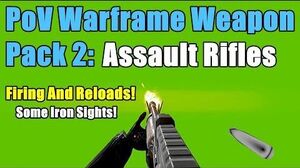 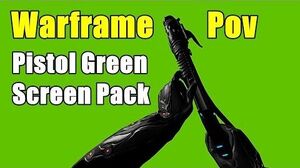