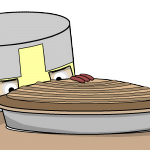 Protonus loves to show indifference, difference and also psychotic disbehavior in order to take advantage or get mowed over like a push-over, but then what is not to like about Protonus by the time he leaves a foot in your intestines.

Protonus also drew his profile picture. So, ask him not.

Protonus is the pie, by the way.

He is Xen C. Protonus (not my real world name, but real online name. :3) who is also known as Freelancer27, in some of the video games you play in. Those who find Freelancer27's and Protonus' who makes erratic and non-atrocious grammars without proper capitalizations is not Freelancer27 and Protonus as these players want to steal the name of Protonus every time he adds an account.

Protonus has 5 daughters and 1 son (in RL? Not really. It's a roleplay. :P). One of them is playing Nova, who also speaks in third-person, like Protonus, but Nova as her name. You do not want to know her real name until it is said to be so. If Nova is angry, try not to troll, or SHE WILL TROLL YOU. :3

Protonus' age is 20 years old. Do not ask about how he got children. :3

Technically, Protonus does not work with Digital Extremes, though he knows some of the knowings of Warframe. Like the Ignis, the Napalm and (somewhat) Grineer Language. He also thinks that General Sargas Ruk has a mouth (but not throat) of a third grade elementary student. :D

Frantically unlikely at the moment, but he did drew a 19 year-old bucket-headed man for his liking. :3

For some of you who might actually find out that I had a DeviantArt account, I actually wanted to remain it untouched until I wanted to go burst drawings soon again.

Retrieved from "https://warframe.fandom.com/wiki/User:Protonus?oldid=533330"
Community content is available under CC-BY-SA unless otherwise noted.