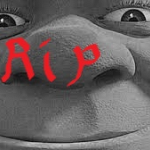 Hey, since I have a Shrek profile picture and the worst name in history, I might as well go full troll. What happened? Well, I was banned for 3 months. I forgot to tell you all about how Shrek died back in 2015. It was around the Second Dream Update. The memes were getting contaminated by LeafyisQueer and there was literally nothing I could do, except finger myself to Blood on the Dance Floor and Black Veil Brides.

Shrek's sacrifice may have been in vain, and he was just a disposable hero, despite how strong he was, and how immortal and noble he was as well. He was alone with his swamp shotgun, and he shot Damn Daniel down, then somebody said "What are those?" to him, and he killed the person on camera, preventing the meme from spreading like the cancer it is. He then ran towards many more people with their memes with an onion grenade in his hand, and it blown up, and so did he and the other memes. His name is frowned upon in 2016, but once he comes back, he'll be better than ever.

He sacrificed himself to make memes good again, just like Donald Trump did with America. Both failed, honestly. Hillary Clinton wins, because we need a girl president for some reason. (America's now doomed, unless Donald Trump collects all 7 Golden Obama Bin Ladens.

Trump won the election, and is making peace with the North Koreans and doing other things, so yay, I guess.

Now, what really happened to Shrek? Well, it turns out that he has ascended into the ether, and may return one day, embodied in his purest form. I'm not sure what he's going to do with his powers, and I don't think he's sure either, but the future looks so bright, I gotta wear shades.

The least serious on the wiki

I am the source of cringe

Here are some random quotes:

"USA is dominate, I am crying tears!" -Russian Leader from Duty Calls, 2011

"Your legs look nice, too, Kevlar" -Captain Vor after coming back to life, 2015

Something I said on Blade Storm page that was nonsense Edit

This is too silly, but I will put it here, anyways, simply because it's interesting. This is took from what I said on July 26, 2015. It has been replaced by something that made sense.

^ What if your Miasma didn't kill them and Bladestorm's bleeding could?

What if Bladestorm was powerful enough to kill them without bleeding?

What if u got gud skrub m8 insted of gitting shrekt on 1v1 nuktoun? XDDDDDD

If you were offended, remember that saltframes will die saltier than ever. (Probably a good thing, I'm not sure)

Retrieved from "https://warframe.fandom.com/wiki/User:Kevlar5_the_Retired_360_Noscoper?oldid=1798295"
Community content is available under CC-BY-SA unless otherwise noted.