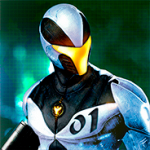 Over the centuries there have been multiple nicknames to represent who was, is and will be the first FOV.

In the Origin System and Outer Terminus he is known as FOVZERO, Faccion Libre's leader.

A dedicated player since the Closed Beta, who has seen, fought, completed, analyzed, studied and enjoyed everything that has happened in that universe, and will continue to do so until the end of it.

Although his stop on the WARFRAME Wikis was not among his plans, he ventured to it into timely help to several friends dedicated almost exclusively to its development and maintenance, becoming currently one of those responsible for the section aimed to the Spanish public.

Independent clan founded in 2013 by the "triumvirate of Warlords" conformed by FOVZERO, NoseD, and Scod_01, all belonging to the original homonymous group. With full Alpha/Beta hybrid Dojo (rooms and research included), and in cordial alliance with other clans.

They don't recruit or chase it, although their doors could always open to nice people.

Retrieved from "https://warframe.fandom.com/wiki/User:FOV-01?oldid=2008462"
Community content is available under CC-BY-SA unless otherwise noted.