00000175
JavaScript not loaded. Please refresh your browser using Ctrl+F5 on PC or Shift+R on Mac.

Undying Flyer is an Infested unit of the Grineer Hellion that uses its jetpack to ram opponents at high speeds. Once it dies, the creature leaves behind a pod which, if left alone long enough, will respawn the Undying Flyer at full health.

It was introduced alongside the Leaping Thrasher in the fourth episode of Nightwave: Series 2 – The Emissary, found in Emissary Derelicts which requires a Zealot Derelict Code from Infested Outbreaks.

They can be found during the Zealoid Prelate boss fight on Exequias, Deimos.

Undying Fliers possess DR that scales depending on your weapon's DPS excluding critical hits. DPS is calculated by

Critical Hits are applied after DR is calculated. Additionally, the average DPS is calculated using health modifiers and is quantized.

For proc damage, critical hits are taken are taken into account. 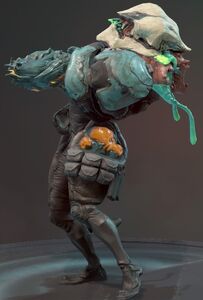