WARFRAME Wiki
Register
Don't have an account?
Sign In
Advertisement
in: Enemies, Machinery Enemies, Enemies With No Drops,
and 5 more
English

None
CODEX
The pride of the Tusk fleet, the Bolkor is the ideal platform from which to mount ground operations. Equipped with a high capacity rotary canon, densely plated and with enough space to carry a platoon, the Bolkor holds its own raining down fire and dropping squad after squad at regular intervals.

The Bolkor is a Grineer gunship, that is used to bring in high numbers of reinforcements on Plains of Eidolon. 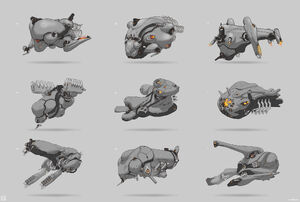