CODEX
An ancient weapon designed by the Entrati. Primary fire siphons life essence from the target to fuel a devastating alt fire. A heavy, oversized automatic rifle with withering fire that delivers rapid heat damage. Alt fire unleashes an arcing projectile that ricochets off surfaces and enemies, exploding every impact.

The Trumna is an Orokin-Era weapon created by the Entrati, a fully automatic rifle firing explosive bullets that builds charges on kills to allow use of the Alternate Fire, a bouncing, high-explosive grenade.

Trumna is acquired by reaching Rank 3 - Associate with the Entrati. Father sells the main blueprint for 5,000 Standing

12,500 is needed for all parts. The main blueprint is also offered as a rank-up reward.

Additionally requires Rank 3 - Trusted with the Ostrons in order to acquire Marquise Veridos and Auroxium Alloy required in its construction. 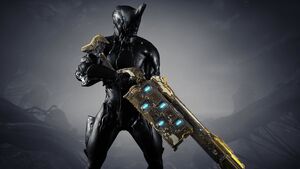 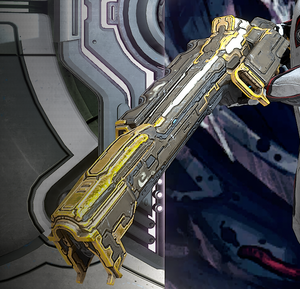 Trumna, as shown in the arsenal 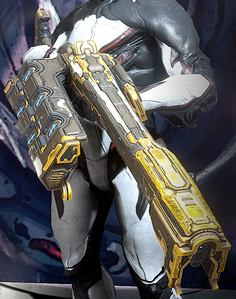