“It's taking longer than I calculated.”
This page is actively being worked on and may not be completely correct. Please assist in making this page accurate.
Confirmation needed on percentages of amalgam transmutation

Combine 4 unranked mods for a chance of a rare mod.
—In-game description 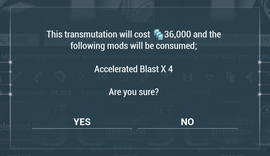 Transmutation is the method of combining unwanted mods and paying credits for a chance to create a more desirable mod. The majority of PvE mods are obtainable through this method. Certain mod classes, such as Corrupted Mods and Event-exclusive mods, cannot be acquired via transmutation.

There is no specific mod combination that produces a certain mod and is purely based on rarity and chance, though polarity and item compatibility are also factors. For example, fusing four

Madurai mods has a higher chance of producing a random

There is also no penalty for fusing the same mod, making the chances of getting a rare mod the same regardless of whether one transmutes four different or identical rares.

Begin by selecting any combination of four unranked mods that you wish to Transmute. You cannot use mods you currently have equipped, Legendary mods, or Set Mods. After an acceptable combination is selected, the Transmute area in the middle of the mod screen will light up, telling you that you are ready to transmute your selected mods. Simply click the illuminated area and then confirm your selection. The cost of Transmutation varies depending on the rarity of mods used. Prices range from 0 Credits

You can mix mods of different rarities to get prices in-between. The end result of the transmutation depends on the collective rarity of mods used. Transmuting four common mods have a chance to produce rarer mods, but less so when compared to transmutations using mods of higher value.[citation needed] For example: combining four different rare mods is costly but yields a greater chance of producing a rare mod from the transmutation. Apart from that, the algorithm of transmutation is completely random — there are no recipes for even the simplest mods.

“It's taking longer than I calculated.”
This page is actively being worked on and may not be completely correct. Please assist in making this page accurate.
More thorough testing is appreciated (especially with transmuting rare mods). If anyone has test results for over 50 transmutations, please contribute. Current numbers are based on watching multiple Youtube videos on rare mod transmutation, sample size 405+.

Disclaimer: The following percentages are contributed by the community. Any differences may be due to random chance. Take these values with a grain of salt.

Transmutation cores can be acquired from Cephalon Simaris in the relay for 5,000 Standing

Mods in the following categories cannot be acquired via transmutation:

In general, mods only obtainable through vendors such as Syndicates, are untransmutable (for example, K-Drive mods).

Certain other mods are untransmutable under no discernable criterion. 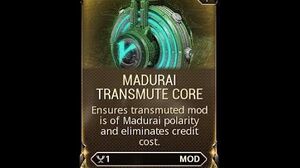 WARFRAME - A Simple Treatise to the Methods of Sustainable Transmutation 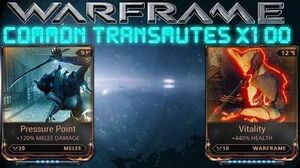 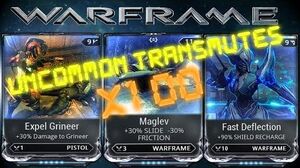 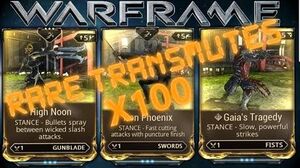