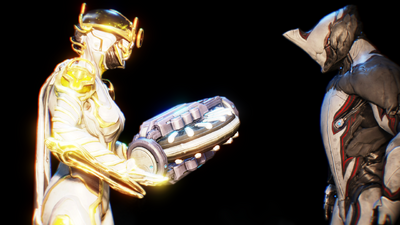 Platinum, Void Relics, alternate Arcane Helmets, Companion Imprints, and Special Weapons (Syndicate, Wraith, Vandal or Prisma) at the Clan Dojo's Trading Post, or at the specified trading relay (Maroo's Bazaar). There is a minimum Mastery requirement of Rank 2 in order to trade, and the number of available trade transactions increases by one each Mastery Rank. Up to five items can be traded per transaction and a trade tax is commissioned to complete the trade. The Trading Post can be found in the Place Decoration tab if you are an Architect in your Clan.

Players can also trade on Mars at Maroo's Bazaar (hold Q and click "set up shop").

The number of trades that can be made per day is the same as the player's Mastery Rank, with exception to Founders, who get an additional two trades per day. The trade limit is refreshed daily at GMT 00:00 and is not affected by the amount of items exchanged in each transaction. Furthermore, ranking up will not provide an additional trade until the next refresh.

Trades are charged for a trade tax which amount in

Credits based on the rarity of the commodity. Players will need to pay the respective tax for the item they receive in the trade. Additionally, a Clan tax can be set by the Clan that the Clan Dojo is associated with.

Primed Mods such as Primed Flow

1,000,000. However, Primed Mods obtained from Daily Tribute cannot be traded.

1) Special Weapons must be unused, without any Affinity, Forma, Lens, or Orokin Catalysts to be tradeable. 2) Each Ayatan Star slotted into a Sculpture increases the trade tax by 2000. 3) Players cannot trade the initial amount of platinum that all accounts start off with. This is to prevent players from creating new accounts to farm platinum. Players cannot trade platinum that has been gifted to them either.

People who use the Trade chat have their own acronyms to summarize their offers. Below is a short list of the most commonly used acronyms in Trade chat. A more comprehensive guide can be found here.