3
Toxin injectors are used by the Grineer in order to poison the forests of Earth and make more room for their own expansion. A functional example of this stationary object is currently only found in Cervantes, the Earth Sabotage mission. Should you have brought an antitoxin, you will be informed by the Lotus that neutralizing the injector's effect is an alternative and more environmentally-friendly method of completing the task as it will not only stop the poison injection but also purify the forest from what it had already absorbed. 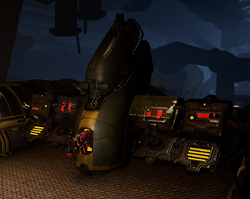 The first objective of the Sabotage is to reach and disable the biocatalyst mainframe, which is done by ejecting and destroying the cartridge it uses for processing toxin. The mainframe consists of two interactable terminals, one of which (left), will allow the insertion of antitoxin mixtures while the other (right) will eject the biocatalyst cartridge.

In order to expend the antitoxin, it is necessary to interact with the left terminal first. The on-screen interaction tips will further remind of this. Due to recycling the Cicero Crisis voicelines, Lotus might mislead the player into destroying the biocatalyst cartridge before inserting the antitoxin and therefore losing the rewards it could have provided. In addition to this, the objective marker points solely at the right terminal.

Next objective is hacking and defending the Toxin Injector itself. Due to the high shield and low level of enemies spawning in the mission, it will be extremely difficult to fail this stage. Depending on which antitoxin is used, the time required to defend the injector might vary, as well as the rewards obtained at the end of a successful defence.

Retrieved from "https://warframe.fandom.com/wiki/Toxin_Injector?oldid=2080505"
Community content is available under CC-BY-SA unless otherwise noted.