A device of undetermined function and origin. Prized by Vox Solaris and the Quills.

A device of undetermined function and origin. Prized by Vox Solaris and the Quills.
—In-game description for all Toroid variants

Toroids are rare resources that can be acquired from enemies or in caves as a rare item in Orb Vallis. Presumably the power sources for various Corpus Raknoids on the Vallis, these items act as either a normal pickup when dropped by enemies, or as an interactable object if found in caves. Just like Sentient Cores are traded with The Quills, all Toroids can be traded with Vox Solaris.

Hildryn require Toroids to craft. Specific Toroids and their values, along with additional recipes that require them can be found on the Toroids' respective pages. 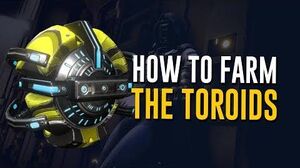 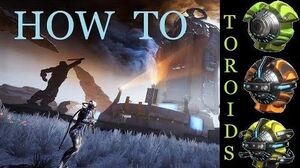 How to Get Toroids Warframe-0 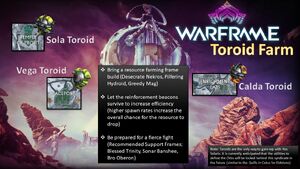