Teshin has a new challenge only the most worthy Tenno can accept. Greater difficulty and greater rewards await. Can you reclaim the Origin System and walk the Steel Path?

The Steel Path is a difficulty modifier for the Origin System hosted by Teshin, testing the Tenno's perseverance against significantly more durable enemies. It was introduced in Update 28.1 (2020-07-08).

In order to access The Steel Path, players must have completed all nodes (excluding Mutalist Alad V and Jordas Golem Assassinates on Eris) on the connected Star Chart, including Dark Sectors, Lua, the Kuva Fortress, and the Zariman Ten Zero.

Note that this also entails completing the Ropalolyst node, which requires players to have completed the Chimera Prologue and all the story quests leading up to it. In addition, it also requires the completion of the Heart of Deimos quest if all nodes were unlocked before the update. Completing the nodes on the Zariman Ten Zero will require the player to complete the Angels of the Zariman.

Once the player meets these requirements, Teshin will invite the player to challenge The Steel Path; they must meet him on any Relay and ask him about "Steel Path?" to unlock the mode. Once players have The Steel Path unlocked, it will be displayed as a toggle on the right side of the Star Chart screen. The Steel Path also adds a 6th tier field Bounty.

The Steel Path only affects normal missions, Dark Sectors, Junctions, and Mission Locators. It does not apply to Nightmare Mode, Void Fissures, Syndicates, or Invasions. The Empyrean Star Chart is also not included.

Incursions will only appear in the Alerts panel when the player has toggled their Star Chart mode to "Steel Path".

Each day at 00:00 UTC, 5 Steel Path Incursions Alert missions will be made available to the player on the Star Chart. A player can attempt them regardless if they have already unlocked the node where the Incursion is hosted in, and completing an Incursion will unlock that node. Incursions can appear on any node except Landscapes and Junctions, and they always appear globally on the same nodes for each player to aid with matchmaking. Each Incursion always awards 5

Some mission types in Incursion have additional conditions to make them even more challenging than regular Steel Path missions:

Steel Path Incursions will refresh in:

Steel Essence is used to buy items in The Steel Path Honors shop from Teshin in any Relay. Note that Veiled Riven Cipher can only be bought once per week despite being an evergreen offering.

Only one reward is available per week and it can only be bought once that week. Every week, the 8 offerings will rotate from left to right, which takes 8 weeks for a full loop.

Note: Click here and purge the page's cache if the above weekly item is wrong. You have to do this every week when the weekly reward changes, which is every Sunday midnight UTC time or when the countdown timer above reaches zero. 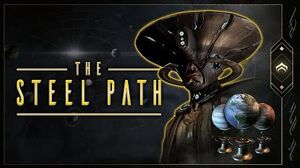 For non-endless missions, most notably Sabotage, a max of 3 Acolytes will spawn and their levels will incrementally increase with every new Acolyte spawn.

In the Deimos Arcana update, we made several changes to the Steel Path and the acquisition of Steel Essence. Our stated goals were to move away from long endurance missions as the most efficient way to collect Steel Essence, while also reducing randomness. After observing player trends, a loot strategy involving both of these elements has come up once again, making regular unoptimized Steel Path play feel less worthwhile.

With the number of new Steel Path rewards being introduced in this update, we wanted to address those strategies, while also bringing up the lower average. We hope these changes reinforce one of this update’s main themes - you should be able to play the game however you want, without feeling forced into prevalent strategies.

Acolytes will now drop 1 of 6 New Arcanes on death!

The Steel Path provides Tenno with two things: a more difficult journey on the Star Chart, and a new economy with Steel Essence to get some gear.

We have decided to revisit the Steel Essence acquisition because at present time, people feel forced to play extremely long macro-based runs to optimize their runs. We would rather try something else.

To confirm player theories and clarify, previous to this Hotfix Resource Drop Chance Boosters did not affect Steel Essence or Riven Sliver drops in The Steel Path. It was not our intention to hide or subvert that information in game, and we should have clarified more quickly that this was the case.

Saying this doesn’t change what appears to be the broader issue, which is concerns with Steel Essence drop rates. We are still gathering data on acquisition rates - but ultimately we are all hands on deck working to make Heart of Deimos the best it can be for August 25th. As of this Hotfix, any Tenno who have already walked The Steel Path will receive a Resource Drop Chance Booster.

Thank you all for the feedback so far on The Steel Path, it helps to shape our knowledge and decisions moving forward.