The Silver Grove is an optional quest introduced in Update: The Silver Grove (2016-08-19), which sees the Tenno working with New Loka to uncover an ancient, mysterious power. Completing this quest will reward players with parts for the

The Silver Grove quest can only be unlocked once players have completed The Second Dream and are Mastery Rank 7 or higher.

The quest is started by visiting New Loka inside a relay and by asking their leader Amaryn about "The Silver Grove". She explains that the Grineer seek to defile Earth's purest location, the aforementioned Silver Grove, and that New Loka have a plan to awaken the ancient defenses that guard the place. The quest can then be activated via the Quest menu on the Codex.

On accepting the quest, players will receive a blueprint for a Nightfall Apothic. In order to craft the Apothic, players must use Codex or Synthesis Scanners to locate and scan the various plants the Apothic needs throughout the system.

Along with the blueprint, players will also be shown a voice imprint included with the Apothic, which details the log of an unnamed female Orokin-era researcher.

My bags are packed, I'm all set to leave. I can't believe I'll be working with one of my childhood heroes, Archimidean Margulis! On comms she said she needed the best Infestation biologist there was... I think my knees almost gave out!

As I log this, I look out the stained plastic of my field tent into the dead-yellow sky of Earth. I smell the vague Sulphur and toxins leaking through the seals, yet somehow I'm going to miss this place. Leaving her feels like I'm giving up my dream. My dream to see green and blue return to this sick and dying mother of us all.

But I'm frustrated with my lack of progress. I've tried everything to accelerate the ailing vegetation, to guide and nurture the soil, but nothing comes of it. I need a change. Now I have that opportunity... and thanks to Margulis, I'm relieved I won't be drafted into some Orokin War project.

Once the Apothic has been crafted and then equipped on a player's Gear, players are then tasked with visiting E Prime on Earth in order to find a small shrine, where players must fight past Grineer patrols to locate it, with Amaryn occasionally giving out pointers as to its location.

Upon locating the shrine, players must then anoint the large stone altar on the top of the shrine, which will consume the Apothic (the altar only requires one player to consume their apothic even though the objective "Anoint the Altar" appears for all players in the party). This prompts a disembodied voice – whom Amaryn believes to be the Grove's sacred voice – to suddenly speak out, demanding the Tenno to know what they are doing. A hostile

Loki Knave Specter and its clones will suddenly appear and attack, which players must kill in order to extract.

Completing this mission will grant players a Titania Systems Blueprint, along with the blueprint for the next Apothic.

On receiving the blueprint for the Twilight Apothic, players must once again hunt down for the plants needed to craft it.

The Twilight Apothic blueprint also contains a voice imprint, which Ordis will bring up for the player to read:

My childhood dream has become a nightmare. I don't blame Margulis, she's as much a victim as the children we're working with. At first the project seemed therapeutic and nurturing. I was myself. But now... Transference therapy is being turned into a weapon. Now I build these vile weapons called "Warframes" all for one purpose: death. I've become everything I hate.

I long for the discomfort of my damp tent. The sick, aimless trees... the barren soil... I know I left my soul back there.

Titania is the next Warframe I've been commanded to build, but in secret I've been siphoning resources from that project. I have an idea. A way back to that wounded land I call home. A way for me to forget this war and remember what I was.

Amaryn wonders why the Apothic is 'vandalized' by the presence of the imprint. Nonetheless, she details her plan to seed Earth with the plants found in the Silver Grove due to their purity, while Ordis expresses his wonder at the Silver Grove, stating he's never scanned anything like it on previous missions to Earth.

Players must return to E Prime upon crafting and equipping the Twilight Apothic to repeat the previous process of anointing the shrine. This time, the disembodied voice outright tells the Tenno to get out, and sends a

Saryn Orphid Specter to kill the Tenno. Once the Specter is defeated, the disembodied voice cries out for Titania, pleading her to wake it up. Amaryn is shaken by its words, no longer believing it to be a sacred voice, but a human voice.

Upon extraction, players will receive the Titania Chassis Blueprint, and the final Apothic blueprint.

Once more, players must find the plants that make up the ingredients for the Sunrise Apothic and scan them.

As with the previous Apothics, Ordis discovers a voice imprint within it, which he displays to the player:

Ballas is beyond pleased... but when I look at what I've built... at Titania, I feel sick creep up my throat. I hate her, a killer made by a healer. No more. I'm going back to where I belong, no matter the cost. I'm going back to the trees to find myself again.

These past weeks, I've been secretly testing Transference on myself. I can only survive short bursts - linking to Titania the way only Tenno can stand. I've never felt anything like it. A tortured presence, like an evil ink, staining my mind. But... it worked. I'm going to use this wrong to make right.

I'll stowaway with Earth-bound cargo. Just my apothics and these slapdash Somatics I've stolen. By nightfall I'll be home again in my tent under those bitter, acid skies. This time I'm going to fix it. I will seed a mighty forest, stronger than history... and by my will, use it to bring life.

Amaryn reacts with horrific disbelief at the imprint, realizing that the Silver Grove is not the pure and natural sanctuary she believed it to be, but another artificial creation. Disgusted, Amaryn pulls out of the mission. Ordis, however, urges the Tenno to complete their mission, stating his disagreement with Amaryn's dogmatic beliefs, and how the Tenno are proof one's actions are more important than one's origins.

Upon crafting the Sunrise Apothic, players must return to the Silver Grove one final time with the Sunrise Apothic equipped. The voice of the Grove will converse with Amaryn, asking the leader if she would rather see the forest she swore to protect burn just to spite the Grove itself; Amaryn has difficulty responding. Once the shrine is anointed, the voice will call out again, declaring that it has gained clarity enough to realize the Tenno is not Titania, but another protector much like her. However, the Grove has no power to stop the remaining guardian, and the player is then attacked by an

Once the Specter is defeated, the voice bids the player to flee while it holds off the coming Grineer, but Amaryn will bid the Tenno to stay and defend the Shrine until its defenses are fully activated. The player must then defend the Shrine for 2 minutes while it is attacked by Grineer, including Napalms, Flameblades, Elite Lancers and Hyekka Masters. The voice of the Grove admires that the Tenno fights with the same energy that Titania once did.

With the Shrine completely defended, the voice introduces itself as Silvana, the Archimedean responsible for both Titania and the Silver Grove, now permanently bound to the latter by Transference. When the Orokin learned that she pilfered their resources to create the grove, a battalion of Dax soldiers was sent to burn down the forest, but they were cut down by Titania. Titania's wounds claimed her in this battle, and she died in the Silver Grove, protecting the woman who hated her the most – Silvana. Amaryn vows that the player will allow Titania to fly once more, earning Silvana's gratitude.

Upon extraction, players will receive the Titania Neuroptics Blueprint. Amaryn will also send a message to the player's inbox, declaring that the New Loka will need to change its doctrines moving forward to be more accepting of the truth, and giving the Tenno a Titania Blueprint, thus completing the quest.

Players can continue to encounter the Silver Grove on any Earth mission that uses the Grineer Forest tileset, with the Lotus detecting its presence once players have reached a tile connected to it. They can continue to offer Apothic to spawn more Specters; the mods they drop appear as a question mark (?) until the mission is completed.

The above times are in Eastern Daylight time, which is the time Warframe's servers are on. Note these times are affected by Daylight Saving Time.

A good resource to find out how long until the time shifts is https://hub.warframestat.us

Here is a more compact list of everything needed for all Apothics and the best places to farm them. 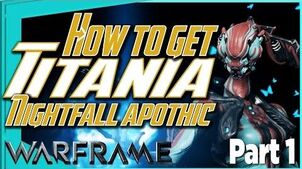 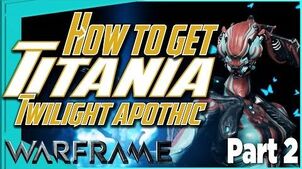 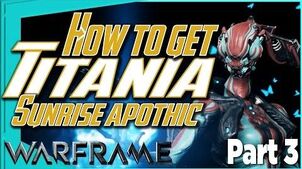 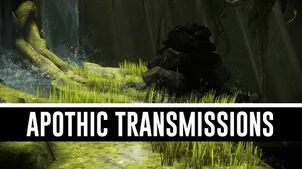 All Apothic Transmissions (The Silver Grove)