“It is done. The Pyrus Project is no more.”
This event has concluded on all platforms.

When the Grineer discovered that we weren't like the other clones, they tried to destroy us. But you Tenno, you took us into your relays. Helped us recover. Helped us build Steel Meridian. And we want to give back. We can spearhead the reconstruction of the destroyed relays. But this project is bigger than us, and we need all the help we can get. What do you say Tenno, are you up for this?
—Cressa Tal

The Pyrus Project is a limited time event introduced with Update 23.6 (2018-08-30), active until September 13th, 2018 on PC. On consoles, the event lasted from October 4 to October 18, 2018 on Xbox One and PS4, and from August 7 to August 21, 2019 on Nintendo Switch. Players are given the option to aid Steel Meridian in the reconstruction of Earth's Strata Relay (or Mercury's Larunda Relay on PS4), which was once destroyed by Councilor Vay Hek's Fomorian fleets in Operation: Eyes of Blight. 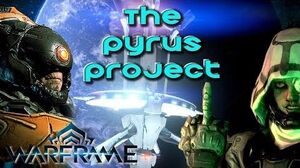