Get ready Tenno, Proxy Retribution is here from now until May 31 at 2 p.m. ET. This Bonus Weekend includes a Tactical Alert, 50% off Darvo Deals, and Double Affinity all weekend!

The The Proxy Retribution Bonus Weekend was a special weekend occasion that took place from May 27, 2016, to May 31, 2016, featuring special Tactical Alert missions and other in-game limited-time bonuses.

This weekend, team up and reap the rewards of double Affinity! You’ll earn twice the Affinity during any Warframe mission you play from now until May 31 at 2 p.m. ET.

The Corpus Proxy Army is back and it's stronger and faster than ever before. Show no mercy Tenno, intercept and destroy them. 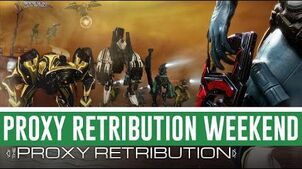 Proxy Retribution (Warframe)
Add a photo to this gallery

Retrieved from "https://warframe.fandom.com/wiki/The_Proxy_Retribution_Bonus_Weekend?oldid=1889172"
Community content is available under CC-BY-SA unless otherwise noted.