Work with Cephalon Simaris to find the source of a mysterious voice.

The New Strange is a Quest introduced in Update 16.0 continuing the events after the Stolen Dreams Quest, involving Cephalon Simaris as he searches for mysterious information. Completing this quest will provide the blueprint for

Chroma, and players are given access to the Sanctuary Onslaught.

Stolen Dreams must be completed before The New Strange can be started.

The first mission of the quest takes players to a Grineer Shipyard Prison Complex on Nuovo, Ceres, where Cephalon Simaris tasks the Tenno with a Rescue mission to free his Sentinels from captivity, who were taken after investigating the Grineer Prison. Lotus asks Simaris about the significance of the facility, to which Simaris vaguely responds about the importance of knowledge.

Once players reach the cell block and free the Sentinels – which takes on the form of three special Helios that disappear once the door is unlocked – Simaris will ask the Tenno to head to extraction for further discussion. However the Lotus, suspicious of Simaris' goals, asks the Tenno to instead find the facility's data vault in order to find out what the Cephalon is after, taking the form of a Spy mission where a lone data vault must be infiltrated and its data console hacked to extract the data. Next, players must exterminate all the remaining enemies. The player is free to extract from the mission once no more enemies remain.

Back on the Orbiter, Lotus mentions that they have managed to retrieve "fragments of a biological signature" within the facility's security logs despite extensive corruption of the data. Ordis runs the security log, which features the sounds of Grineer gunfire as if engaged in battle, along with a mysterious voice that says:

HERE WE SHALL SEARCH AND FIND. THE EYES OF DAY DRINKING THE NIGHT.

Recognizing the mysterious voice as the same one from the Arcane Machine discovered on Ceres, the Lotus asks the Tenno to pay Cephalon Simaris a visit to find out what else he knows. Upon visiting Cephalon Simaris on any Relay (Maroo's Bazaar being the only exception) and asking him with the prompt "The eyes of day drinking the night?", Simaris tells the Tenno that knowledge must be earned, and then asks them to perform another quest for his Sanctuary in exchange for revealing what the biological signature means.

Note: If you are having trouble finding the Cephalon Simaris room and keep being directed by the game to the wrong room, you need to look for the two blue lifts which will be behind you as you look into the room the game marks. One will transport you up to the correct level, where you'll find Cephalon Simaris behind a door located in the same place as that which you were directed to a level below. The lifts only transport in one direction. You may also fast travel to him, by pressing escape, fast travel, and Cephalon Simaris.

Note: Players must undertake the Synthesis tutorial from Cephalon Simaris first in order for the dialog prompt to appear.

Before undertaking this next mission, it is imperative that players equip Synthesis Scanners in their Gear menu, said scanners being available from among Cephalon Simaris' offerings for 5,000

‍5,000, to assist in accomplishing the objective.

The next quest step involves synthesizing three Elite Arid Lancers by running the Ares Sabotage mission on Mars. Each mission spawns a single Synthesis target, meaning players will have to run the mission three times to complete this step of the quest. The sythesis target is a special Arid Lancer with a visible dark blue outline. The target can also be tracked by following floating blue lights that can only be seen through the Synthesis Scanner, which indicate that the target is nearby. Simaris will also notify the player when the target is in range. At this time, a gold hexagon icon will appear on the mini map representing the Elite Arid Lancer.

The target will not initially be accessible in the mission. Players should proceed with the normal steps and path of the Sabotage mission. At some point moving across the map from one phase of the mission to the other Simaris will give notification the target is in range and the target's gold hexagon icon will then appear on the mini map.

Players must scan 4 nodes on the Elite Arid Lancer, accomplished by equipping their Synthesis Scanner from the Gear menu, aiming at the target node and holding down the fire key (default LMB ) until the node is scanned. The nodes appear as blue orbs on the target. The Arid Lancer target will then disintegrate once all 4 of their nodes have been scanned, indicating a successful synthesis. Scanning a node may cause the target to act unpredictably however, the player can prevent them from becoming alert by using stealth abilities like Rift Walk.

Upon scanning all three Synthesis targets, players must return to Simaris on the designated Relay, and engage him with the prompt informing him that all three targets have been synthesized. Simaris will thank the player, telling them that their scans have uncovered something that his sentinels missed, then reveal that the biological signature is Tenno in nature. Interested in what the biological signature is, Simaris will give the player a blueprint for a Scorched Beacon, and asks them to construct it.

Once the Beacon is complete, Ordis notes that it is sending a signal, which turns out to be a transmission from the Arcane Machine that says:

ALL IS SILENT IN THE CALM. HUSHED AND EMPTY IS THE WOMB OF THE SKY.

Upon hearing this Ordis begins to experience malfunctions. Simaris intervenes to save Ordis' program while asking the player to track down the source of the signal, with the Lotus believing that the Corpus may be the next lead.

Investigate the source of the transmission: Morax, Europa

Following the source of the transmission, the Tenno are tasked to undertake a Mobile Defense mission on a Corpus base on Morax, Europa, in order to extract information regarding the transmission. Terminals will need to be defended in order to complete the mission, granting the blueprint for another Chroma Signal upon completion. Players must build the Beacon to proceed.

Once the Beacon is complete, Lotus expresses her shock at recognizing

Chroma from the transmission, and expresses suspicion that someone is trying to cover their tracks using it. Meanwhile, Simaris reveals to Ordis that he can restore the latter's memories and possibly repair his malfunctions over time, and after Ordis deduces that they can decode the rest of the transmission on the Arcane Machine itself inside the Orokin Derelict in which it was found, Simaris praises Ordis' potential, which he feels is being squandered by being a servant to the Tenno. Irritated at the banter, Lotus orders the Tenno to proceed to their next mission.

Synthesis Scanners are required for this mission.

Returning to the site of the Arcane Machine, this mission sees the Tenno fight through a Grineer Settlement to get to the Portal that will take them to the Orokin Derelict where the Arcane Machine was found. Lotus mentions that Chroma was one of the most powerful Warframes with a great ability to adapt. Simaris deduces that the Chroma they're looking for is not Tenno-controlled, and that it is this mystery that is his goal.

Upon reaching the Arcane Machine, a hostile

Chroma Warframe will appear by it, armed with a

Dera. Lotus and Simaris order the player not to engage it however, and that it should be Synthesized instead using Synthesis Scanners. Players are free to head back to extraction once they have synthesized the Chroma, receiving Chroma Mark blueprint as a reward.

Back on the Landing Craft, Simaris confidently asks Ordis to extract a blueprint from the synthesis brought back by the Tenno. Ordis manages a blueprint, but unfortunately is unable to extract any more leads. Simaris then reveals that he has an Arcane Codex piece and knowledge of the location of another Machine, much to Lotus' increasing frustration. The Chroma Mark must be built to progress.

At the completion of the Beacon, Simaris makes Ordis an offer to become the "Steward" of his Sanctuary, to which Ordis readily accepts. Promising to restore Ordis once the hunt for Chroma is finished, Simaris gives the players the location of Chroma, telling them that by defeating the Warframe they will know who controls it.

Landing on Ose, Europa, the Tenno are assigned to lure in Chroma by activating the Arcane Machine to trigger a Defense mission. While the mission initially starts out on the Corpus Settlement of Europa, the actual defense objective is located on an Orokin Derelict, accessible through a portal room. The Arcane Machine must then be defended against five waves of Corpus attackers. After the 5th wave, Chroma will appear alone. At Ordis' suggestion, Chroma must then be scanned 5 times using the Synthesis Scanner while still defending the machine. Once all Corpus are eliminated and Chroma is scanned 5 times, the mission is completed and the player is rewarded with the Chroma Blueprint. The component blueprints can be acquired as Junction rewards. (A bug might cause enemies not to cross into the Derelict area. In this case Chroma can spawn before all enemies are defeated. The wave will be marked as complete after killing enemies who did not cross the portal.)

Simaris is disappointed at Ordis' action to scan Chroma instead of destroying it, to which Ordis replies that he is foremost the Operator's Cephalon.

Players will also now have access to Simaris' Sanctuary Onslaught. 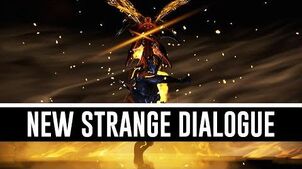 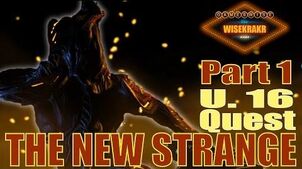 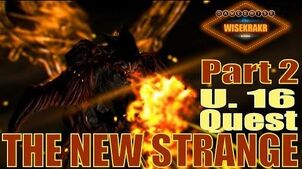 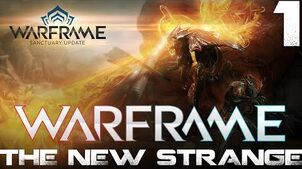 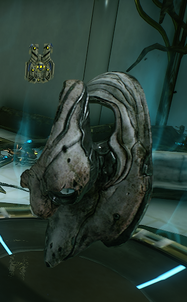 The Arcane Machine that must be defended in the final stage of the quest. Appears to possibly be of Sentient origin.
Add a photo to this gallery

Retrieved from "https://warframe.fandom.com/wiki/The_New_Strange?oldid=2002419"
Community content is available under CC-BY-SA unless otherwise noted.