The Law of Retribution

Tenno are out for vengeance, and Grineer Councilor Vay Hek has nowhere left to hide. Hot on his trail after the assault on Relays during Eyes of Blight, the Lotus will guide a precision strike force to hunt down and put an end to Vay Hek once and for all. Be wary Tenno. Numbers alone will not protect you when diving into the heart of Grineer military power.

The Law of Retribution was the first Trial mission available in WARFRAME added in Update 16.0 (2015-03-19); where the Tenno pursue Councilor Vay Hek's location in order to defeat him and end his reign against the Tenno once and for all. This Trial was significantly more difficult and complex than the rest of the mission types, as they feature unique mechanics, special mission modifiers and obstacles not found anywhere else.

Its blueprint used to be available in the Market for 100,000 Credits

100,000. This mission required a minimum of four players and a maximum of eight players to play.

The records of the best completion time of this Trial can be seen here, and its Nightmare version here.

Vay Hek's Fomorian assault on our Relays was devastating, but he failed to break us. Now we take the fight back to him. Now we exact justice.

Players could access The Law of Retribution by crafting keys from their respective blueprints. The associated keys were one-time use and were consumed if players succeed, fail or abort the mission. The blueprints were reusable.

This is a key for the Nightmare version of The Law of Retribution, featuring more complexity and difficulty for endgame players. This mission could be initiated from Earth.

The first stage transports players into a Grineer Forest. The objective is to destroy all four Toxin Injectors present.

Toxin damage. Additionally, they will gradually lose contact with the Lotus due to the said gas interfering with external connection.

The objective is to destroy all four Toxin Injectors. This can be done by detonating a charged Tritium Battery, which can be obtained from a Tritium Stabilizer by hacking the two respective Grineer Consoles. Once dispensed, players can charge the battery by carrying it, doing so will drain the carrier's energy by 25s-1 and prevent the use of Warframe abilities. If the carrier runs out of energy or enters bleedout, the battery will automatically drop and explode if not picked up in time. If dropped, the battery cannot be picked up by someone who has already held that battery before. Once charged, carry with care as the battery can also explode if it experiences too much rough movement, like sprinting or bullet jumping.

There are four Toxin Injectors covered in separate protection fields. Detonating the bomb will have no effect if said field is still active, but it can be temporarily disabled by hacking four different consoles connected to the injector via orange pipeline cables. Note that taking too long to detonate the bomb will reactivate the protection field. After destroying all four, the stage will be completed and will end. The players are then transferred to the next stage.

The second stage transports the players into a Grineer Shipyard. The objective is to infiltrate into the heart of the Grineer Military to uncover Councilor Vay Hek's location.

From the initial spawn point, the players will encounter a large gate with a giant monitor, which is connected to eight large pressure pads each plastered with large Grineer label in front of it. This gate requires all present players to step on said pressure pads in a certain order to open them.

Players can learn the order of the pads by hacking one of the Grineer consoles spread across the area (see map for exact location). Hacking said console will display a Grineer label on the giant monitor, and simply stepping on the pad corresponding to the displayed symbol will advance the unlocking process.

Be warned that if players make a mistake by either stepping off their pad or stepping the wrong pad, the lock will reboot and all players on their pads will be lethally damaged with

After progressing, players will be faced with a Hijack mission with a twist. Players are required to transport a Fomorian Core to the extraction point to progress. Be wary that some of the railings are hazardous and can damage the core (by ~1000 hitpoints) on contact, the core will only take damage one time per contact and be stopped in-place on electrified rail. Players can deactivate the hazard by stepping on up to three different pressure pads, refer to map for exact locations. If the core touches a rail, all players on pads must get off and back on again, the core will move backwards off the rail and can be pushed forward again. Be warned that both Vay Hek, in his Drone Form, and The Grustrag Three will spawn in the final room.

The third and final stage transports players into a Grineer Settlement. The objective is to confront and defeat Councilor Vay Hek. The map provided below only illustrates the boss room as the tiles before are generated randomly.

The mission directly leads players to a boss room, where they will encounter Councilor Vay Hek inserting himself into his Terra Frame. The boss will be covered in protection field and directly attacking him will not have any effect, but it can be deactivated by destroying all five power plants powering the protective field.

Said power plants can be destroyed by detonating a charged Tritium Battery inside it, which can be obtained from random mob spawn (marked in HUD). Once obtained, the battery can be charged the same way the players do in stage 1 - Albeit with a drain rate much faster (50s-1), the battery charges 5% per tick and thus requires 500 energy to charge fully. Note that each power plants are locked by two pressure pads spread all across the map (see map for exact location), players can quickly find their respective pads by either following the pipeline cables connected to the door or match the corresponding plant labels with the pressure pad. Be warned that the battery sometimes destabilizes immediately at 100%, beginning its countdown, it is best to stand inside the power plant as the battery finishes charging so it can be thrown in quickly. Rinse and repeat until all five buildings are destroyed and defeat the boss.

Be wary that the enemy mobs can activate a Grineer console that will charge the Balor Fomorian's weapon, and can be sped up multiplicatively if more consoles are hacked. If the Fomorian fires, it will annihilate the entire squad and extinguish the flames on the power plant, restarting the boss' protective field. Players can prevent this by defeating Vay Hek before it fires or by guarding the respective consoles (check map for exact location).

Once he is defeated, Councilor Vay Hek will be forced to escape the Tenno and the trial will be considered complete. If this is the player's first completion, the Lotus will award them a Sevati Sekhara badge. An alternate ending can be achieved by defeating Councilor Vay Hek in Nightmare mode--Wherein a cutscene plays, depicting the Tenno gazing over Councilor Vay Hek's broken down Terra Frame before promptly leaving the battlefield. If this is the player's first completion of the Nightmare mode, the Lotus will award them an Aseron Sekhara badge.

The rewards for completion of the trial are as follows: 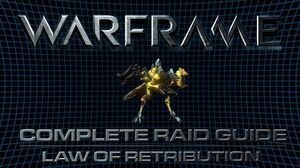 ISEGaming - The Law of Retribution (Guide) 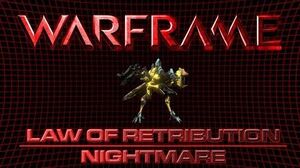 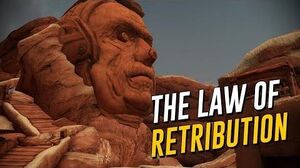 The Law of Retribution (Warframe)