WARFRAME Wiki
Register
Don't have an account?
Sign In
Advertisement
in: Enemies, Enemies With No Drops, Cloned Flesh Enemies,
and 8 more
English

https://www.warframe.com/droptables
Arrogant. Sadistic. Unstable. They are perfect for this.
—Councilor Vay Hek

The Grustrag Three (commonly abbreviated as the G3) are a group of Assassins, founded by Councilor Vay Hek, who come after Tenno that have completed five Invasion missions against the Grineer.

The Grustrag Three were formerly regular Grineer marines who (while aboard a troop transport) suddenly slaughtered their comrades, claiming that they were growing "impatient for the killing". After being committed to the Grustrag Reconditioning Facility, Facility Director Dr. Tengus discovered that the marines suffer from a rare mutation brought about by cloning, vastly increasing their combat potential at the cost of deteriorating mental faculties.

Under Councilor Vay Hek's order, Tengus reconditioned them, with the intent of focusing their aggression towards the Tenno instead. Although mostly successful, the Three still had lingering violent behavior towards fellow Grineer. To counteract this, Tengus developed the Grustrag Bolt, a device that limited their effectiveness against other Grineer personnel. Tengus had additional Bolts created, to be used against the Tenno during the Three's operations.

With The Grustrag Three now prepared for combat, Vay Hek deployed them with the sole purpose of attacking those who supported enemies of the Grineer. However, General Sargas Ruk criticized Hek's actions, reminding Hek of the soldiers The Three have killed and warning him that they would eventually grow out of his control.

https://www.warframe.com/droptables
Leekter is a member of The Grustrag Three. He wields a Manticore axe and throws flashbangs to blind players in battle.

Although Leekter does not spawn by himself under normal circumstances, he may individually spawn inside Darvo's weekly mission as a Field Boss if the associated faction of the mission are Grineer.

The agony treatment has worked! Tests show aggression has been shifted to The Tenno! The Grustrag Three are now ready for release and are eager for your orders.

Please note: fratricide is still an issue. Conditioning did not completely remove violent tendencies toward fellow Grineer. My solution is the Grustrag Bolt. When attached to a subject, this device limits combat effectiveness against all Grineer personnel. The bolt will ensure collateral death is acceptably limited.

I have produced a surplus of these devices. Perhaps these will also aid you with your problem?

https://www.warframe.com/droptables
Shik Tal is a member of The Grustrag Three. He wields a modified

Marelok that fires small dumb-fire rockets (akin to those fired by Hellions) and a giant shield similar to Shield Lancers. Similar to the Shield Lancers themselves, he can use his shield to charge forward to knockdown and knockback players.

Although Shik Tal does not spawn by himself under normal circumstances, he may individually spawn inside Darvo's weekly mission as a Field Boss if the associated faction of the mission are Grineer.

Releasing the Grustrag Three? Tell me this rumor is a lie. Tell me you have not forgotten what those defects cost me. Traitors must be eradicated but you think they can be rehabilitated? Arrogance. If it was up to me, Grustrag and everything in it would be ash. No Doctor can cure disloyalty.

The responsibility for this mistake is yours alone. Trust me, you will bleed regret.

https://www.warframe.com/droptables
Vem Tabook is the member of The Grustrag Three. He uses a modified

Hek that fires electro-shells in bursts of around 10 at its target, each shell dealing electricity damage in a small radius, making them deadly should all of them connect with their target or the surrounding terrain.

Although Vem Tabook does not spawn by himself under normal circumstances, he may individually spawn inside Darvo's weekly mission as a Field Boss if the associated faction of the mission are Grineer.

Vem Tabook, leader of 'The Grustrag Three', was committed after the group slaughtered all fellow marines aboard a troop transport. Evidently, the ship took too long to reach battle and the subject was simply "impatient for the killing". Like his accomplices Shik Tal and Leekter, Tabook suffers from a rare cloning mutation. This makes him highly effective in combat but completely unfit for duty.

RECOMMENDATION: Permanent incarceration for study. The subject's combat ability cannot be ignored. If the subject's aggression can be focused, he may yet prove a useful weapon. 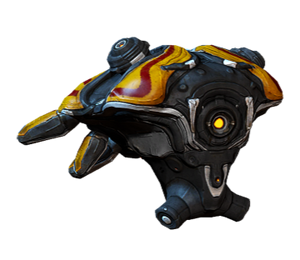 Each marine is accompanied by a Carabus Sentinel, which are equipped with

Laser Rifles to provide additional firepower. They do not have a name in game, only a health/shields bar, similar to

When a player is defeated by the Grustrag Three, one of the three sentinels will detach from its host, then hover and deploy a shield over the downed player. It prevents other teammates from reviving the player while the sentinel attaches the Grustrag Bolt.

It also exists as an alternative skin for Dethcube, which is available for purchase for 35 Platinum

Triggering an attack from the Grustrag Three requires the player to have a death mark. This is acquired by fighting against the Grineer in at least five instances of Invasion missions. Once the death mark is acquired, the player will receive an inbox message from Vay Hek, stating:

Acquiring another death mark will trigger this message:

The chance The Three will appear on any given Grineer mission is additively increased with each player in the party with a death mark. They have a chance of spawning once every 10 seconds for the first 5 minutes.[citation needed]

A single member of the Grustrag Three will also appear in Clem's weekly mission on Grineer tilesets. However this member will not drop anything upon defeat.

On arrival, the Lotus, with her transmissions distorted, will immediately order the Tenno to abort the mission, prompting extraction regardless of any uncompleted objectives (except for Defense and Interception due to their lack of extraction zones). Nonetheless, the Tenno can still try to fend off the Grustrag Three themselves.

Despite their bulky appearance, each member of the Grustrag Three is capable of a quick dash in any direction, which they use to avoid fire and close in on their targets. The Grustrag Three usually attack in turns, making it difficult to focus on a specific marine to take down. Not only that, but they are capable of strategic positioning, movement, and timing of attacks in a more advanced manner than normal Grineer. This includes crouching and hiding behind Shik Tal's shield as he's laying down suppressive fire, launching a sudden aggressive attack as a group after Leekter uses his flashbang, or changing position while Vem Tabook lays down suppressive fire. Their behavior changes vastly, sharing behavioral traits with heavy Grineer units such as Bombards, Napalms and Heavy Gunners, but at the same time taking cover behind objects when necessary.

The Grustrag Three are fully vulnerable to Status Effects and most Warframe abilities. As such, they can be easily incapacitated with weapons such as the slam attacks of

Viral damage and proc work particularly well on them, reducing their overall durability by a significant amount.

Radiation damage can also be used, as it deals extra damage to their Alloy Armor and if procs, confusing them, causing them to attack each other or fellow Grineer. However, their Carabus Sentinels cannot be damaged by any means, they are only destroyed if its respective marine is killed.

If the Grustrag Three put a Tenno into bleedout, their Carabus Sentinel will capture them, preventing them from being revived but also pauses their bleedout timer until the Three are defeated. If the entire squad is defeated and captured, the mission will fail.

Upon returning to the Orbiter, the player will receive an inbox message from the Lotus stating the Grustrag Three have attached a Grustrag Bolt to their Warframe, reducing that Warframe's damage against all Grineer by 50%. Attached is a bolt release blueprint, which will automatically apply upon claiming from the Foundry.

Players who do not have a death mark against the Grustrag Three will not prompt them to capture. A member that spawns in Clem's weekly mission will also not capture, regardless of death marks.