Intel shows a growing conflict that will begin on Gradivus in Mars. Expect it to spread. The Grineer are planning an operation against the Corpus lead by Sargas Ruk. Alad V of the Corpus has discovered a cache of Tenno in cryosleep and intends on exploiting them for his secret weapons project. The Grineer are outraged at this contract violation. They are using this as an excuse to invade Corpus space, enslave the local population, and grow their power. The Lotus is your guide but not your conscience. You will have to choose which side to support: Choose Loyalty, and side with the Grineer to destroy Corpus forces and free your kin. Choose Sacrifice, siding with Corpus to halt the Grineer conquest and enslavement of colonies. Both sides have reached out to the Lotus with reward offers for each contested location as well as rewards for the conflict as a whole.

The Gradivus Dilemma was an Event that was held from Thursday, October 24 2013 @ 06:00 A.M. GMT through Wednesday, October 30 2013 @ 4:00 P.M. GMT. The event was focused on special Exterminate missions in locations on Mars that the Grineer and Corpus were competing for control of. Tenno chose to assist a faction of their choice in defeating the other, with special rewards having been offered by each faction for helping them achieve victory.

Corpus scientist and entrepreneur Alad V discovers a cache of Tenno in cryosleep on Mars, intending to use them for his secret weapon: The Zanuka Project. Grineer General Sargas Ruk responds by invading Corpus territory and expanding their control over the Origin System, under the excuse that the Corpus violated a contract regarding the weaponization of ancient Orokin technology: the Warframes. To tip the balance of power, the Tenno is under a dilemma: to free their kin, or to let Grineer expansion run amuck.

After a six-day war, the Grineer proved victorious over the Corpus, holding the most sectors under their control. 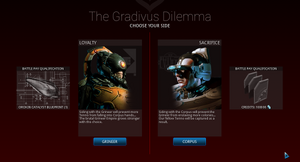 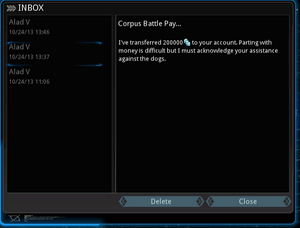 Both sides offered payment for supporting them in a particular contested location on Mars. Selecting a conflict location presented a choice of sides and their respective battle pay. Your battle pay was only given after the location conflict is resolved regardless of which side ultimately won the location. You will need to commit to a single side to earn this Battle Pay by completing 5 missions to prove your support. If you switch sides, you will erode your rating with the opposition and could receive neither reward till you increased one side to five again. Battle Pay was sent to your inbox after the local conflict ends.

The following 4 crossed-out nodes were "manually altered by a user," and therefore will not contribute to the end-result of the event.
Read more at the official forum post by DERebecca.
(Battle Pay was still awarded to participants of these nodes)

Commented out map as it is currently inaccurate

As of Hotfix 10.5.6, Spear, Martialis, Tharsis and Augustus no longer count toward controlled nodes as a result of outside manipulation (cheating) of the event results.

You will only receive the following rewards after the event has ended. The faction that controls the most nodes (i.e. at least 7 out of 13 nodes - as 4 aren't counted, see above) is considered the victor of the conflict.

Rewards
Rewards given out regardless of the victor

The rewards are determined by the faction that wins the war and which faction you have done most missions for.

When both sides have exhausted themselves in this conflict you will be rewarded based on two factors: your participation and if you supported the winning side. The winning side will be determined by the dominance of the faction, for example: When the event ends, if the Grineer only succeeded in conquering 6 missions, they will still lose due to Corpus still holding 7 missions.

Complete 5 missions, regardless of the victor.

Tier Two Rewards Complete 25 missions of any side, with the reward determined by the victor.

Complete 100 missions, with the reward determined by two factors: the victorious side AND if you supported them (you did more missions for them, than against them).

Leaderboard position is based on the sum total of which faction your Clan is supporting.

Speech 1: Rraahudd Tenno! Now we fight together! Now we crush the greedy milk from their skulls. The Corpus will pay for their crimes with their useless lives.

Speech 3: Tenno, of course you side with us. Of course the Grineer are your best option. We share your joy in Corpus death.

Taunt 1: So, the betrayers are fighting for the dogs now? Why am I not surprised? The sooner my Zanuka Project is completed, the better. The system must be ridden of your hypocrisy.

Taunt 2: What's that test tube dog giving you to fight for him? Whatever it is, I'll double it!

Taunt 3: Why, Tenno, what an intriguing Warframe you have. I look forward to adding it to my inventory.

Taunt 4: Do you really think you're saving your comrades by supporting the dogs? What do you think happens if you allow Sargas to win? Do you think you'll be safe when you're all his slaves?

Intro 1: Make sure the Grineer win this battle, leave no Corpus functioning.

Intro 2: You have chosen to support the Grineer in this fight. Eliminate all Corpus.

Intro 3: You are fighting alongside the Grineer in this mission. Destroy all Corpus.

Speech 1: Tenno, you know, we may not always see eye to eye... well, you don't have eyes, but I'm pleased to see we've found common ground in our fight with these Grineer dogs.

Speech 2: Hmm, yes, you've made the smart choice, Tenno. When the dogs fall, there will be profit for all of us.

Speech 3: You and I are not so different, Tenno. We both know those dogs need to be put down, yes... I sense we are at the beginning of a beautiful new partnership.

Speech 4: Tenno, this was the only rational choice. And please don't worry about your friends. I have grand plans for them.

Speech 5: So, we agree. The Grineer are too powerful, too arrogant. They must be put in their place. I'm glad you won't let our... differences get in the way of our... common interests... yes.

Speech 6: Nobody wants to be a slave. You understand that. These dogs aren't our masters. We won't follow their orders any longer!

Taunt 3: Tenno, Alad will betray you. Alad will defile your kind. Alad will bleed from his selfish eyes as I crush him with your metal corpse.

Intro 1: You are fighting with the Corpus in this battle. No Grineer can be left alive.

Intro 2: The situation forces you to help the Corpus in this mission. Kill all Grineer.

Intro 3: Your sense of duty compels you to help the Corpus today. Destroy all Grineer forces.

Tenno,
We have a situation developing. Alad V and his Corpus troops were on the verge of capturing a long lost group of Tenno still locked in cryo stasis. Things escalated quickly when Sargus Ruk of the Grineer discovered the plan and demanded the frames for himself. Alad V refused and so Ruk ordered his territory confiscated. Fighting broke out a short time ago. At this point either side can win and only we could tip the balance.
Tenno, I can not in good conscience tell you who to support in this conflict. If you choose to support Sargus Ruk, you can save the sleeping Tenno but the Grineer will grow even stronger. Fight for the Corpus and weaken Grineer supremacy but our comrades fall to the mercy of Alad V.

Tenno,
I have intercepted a message from the Corpus board to Alad V. They have grown tired of bankrolling Alad V's war effort and have withdrawn their funding. This has left Alad with no other option than retreat. Sargas Ruk is already readying his victory speech. This battle is over.
You have all done well. Those of you who supported the Grineer have given me the time I needed to locate our sleeping comrades. A recovery team is already travelling to retrieve their cryopods. Those that supported The Corpus have slowed Grineer aggression. Though the Grineer ultimately emerged victorious, they did so at great cost.
The time for partnerships with these warlords has ended. We are no longer forced to support them in their petty conflicts. We must return to our stated goal of bringing balance to the solar system.

Dialogue on the forums[edit | edit source]

Sargas Ruk and Alad V have created accounts on the Warframe forums. They only seem to insult each other and get their threads locked but they are indeed account controlled by the developers that may reveal parts of the lore.

A Chance To Make it Right: Thread

Alad V: Sargas, your helmet will fetch a fair price although I fear it is riddled with fleas. My pet is also hungry for a new toy, and your Rollers are a perfect choice. Be wise with your words, Ruk.

Sargas Ruk: HA!HA!HA! My Rollers can take out not only your 'pet', but your pathetic MOA army. We are bred for victory, while you exist to be defeated and crushed by the Grineer!

Alad V: I will display Trophies made from melted Rollers when we're done with you. Your army is barely worth my time, it will cost more to kill you than you're worth.

Sargas Ruk: Oh Alad, I couldn't hear you over the thousands of MOAs that just met their doom by brute Grineer Force. Crushed. Scrapped. Cutting costs by manufacturing with paper? HA!

Alad V: I could use some scrap metal for the floors of my Gas City; at least it would come cheap. You're stumbling on thin glass Ruk, take your cowardly men back to your pile of sand.

Sargas Ruk: The cowardly man is the one who buys his armies, not breeds them. I've crushed more skulls with my bare hands than Credits in your bank, and your skull is next.

Alad V: You under estimate my Credits in the bank then. As you know, my Gas City is growing bigger than your little planets of sand. I will obtain the Tenno cryopods and you will not stop me. Any attempt will end in your little army begging for my mercy. I'm surprised you can communicate beyond Grunting honestly.

Sargas Ruk: HA! You should be surprised I can do anything but LAUGH at your weakness. Grineer dominance will thrive, all will be subject to the rule of force, pain, and bow to the Grineer! No amount of Credits in the world can save you from a Grineer Soldier!

Alad V: Grunt and foam at the mouth all you want, this will end with you taking a dirt nap like the dog you are.

Retrieved from "https://warframe.fandom.com/wiki/The_Gradivus_Dilemma?oldid=2092459"
Community content is available under CC-BY-SA unless otherwise noted.