WARFRAME Wiki
Register
Don't have an account?
Sign In
Advertisement
in: Not Replayable Quests, Quest, Lore,
and 2 more
English

Completed The War Within

Nef Anyo has stolen the children of the Mycona Colony and it is up to you to get them back. You must challenge Nef on The Index and beat him at his own game. But Tenno, beware, not all is as it seems.

The Glast Gambit is an optional quest offered by Ergo Glast of The Perrin Sequence, which pits the Tenno against Nef Anyo's schemes as they attempt to unearth the mysteries behind the people known as the Mycona Colony and the Infested. Completing this quest will reward the blueprint for the

In order to unlock the Quest, players must have completed The War Within quest, and then speak to Ergo Glast, the leader of The Perrin Sequence, in their room within any Relay.

Glast will relay to the Tenno the story of the Mycona Colony, whose inhabitants apparently thrive by harvesting material from the Infested. Nef Anyo however has taken not only the Mycona's resources, but also their children, with Glast showing the Tenno a recording from a child named Neewa, one of the kidnapped children. Before any rescue attempt can be made for the children however, Glast implores the Tenno to first defend the remaining Mycona colonists who are under siege from the Infested.

If the player accepts the mission, they are prompted to set the quest as active in the Codex. Back on their Orbiter, Lotus expresses her skepticism at a colony surviving an Infested siege. The player will also receive a message from Glast in their inbox, giving them a drawing made by Neewa to remind them of what they are fighting for.

As the Tenno arrive on an Infested Ship, Glast explains that Nef Anyo's actions have left the colony defenseless, and that three gateways have to be closed in order to secure the colony. Along the way, they come across the colony in a section of the ship that is untouched by the Infestation.

Once players reach the first of the gates defended by armed colonists known as Hunters, the Tenno must destroy three Infested Tumors that bar the gate, after which players must then defend the Hunters as they attempt to close the gate via a security console near the opening. The Hunter closing the gate must remain alive in order for progress to be made; if the Hunter is killed, the gate will stall, and the gate cannot be closed until another Hunter can get to the security console to continue. The mission will fail if all 6 Hunters are killed.

Upon closing a gate, players must then repeat the process on two more gates to close them. When the gates are sealed, Glast instructs the Tenno to clear out the remaining Infestation inside one of the rooms within the colony. The Infested continuously spawn from 6 Spawn Pods within the room that must be destroyed in order to clear them out.

On clearing the Infested, Glast asks the Tenno to return to their ship, as he explains that the Myconians are only safe for the moment. The mission ends when the player reaches extraction.

Back in the Orbiter, Glast explains that the Perrin Sequence had tried to pay a ransom for the stolen Myconian artifact known as the Triuna and the kidnapped children, only for Nef Anyo to reject them. Glast thus suggests that the Tenno use Nef Anyo's weakness for gambling by challenging him to The Index, the Corpus' blood sport. A disbelieving Lotus asks Glast why the Tenno should risk themselves in the Index after they've already helped them. In response, Glast reveals that the Mycona's knowledge of the Infested comes from an Old War relic, and explains that they are offering to share that relic with the Tenno as compensation.

Before players can enter The Index, they must first wager 100,000 Credits

100,000 in order to be allowed into the mission as per the Index's rules. If players win the Index, the credits wagered will be returned to them, along with a 20,000 Credits

The goal of the Index is to earn Index score for the team through the collection of Index Points, which are dropped by participants killed in battle. Represented as green, glowing diamonds, Index Points can be collected by walking over them, and then deposited to a designated bank location in order to earn the actual Index score.

In this mission, the Index is segmented into rounds of 3 minutes each. In order to win against Nef Anyo, players must win three rounds of the Index by gathering more Index Points than the opposing team before the time runs out for each round.

If the player is successful, Nef Anyo relents to release one Myconian prisoner, but exclaims that he will keep the girl in his possession. Back on the Orbiter, the Lotus airs her suspicions to Glast at Nef's interest in Neewa, asking him what he is hiding, to which Glast responds that Nef may be trying to bait them back into the Index by withholding prisoners.

Once more, players must challenge the Index a second time to free two more prisoners, now with a minimum wager of 120,000 Credits

120,000. As with the previous bout, players must win three rounds of 3 minutes in the Index each in order to win the mission.

After this second mission, Glast will send another inbox message, this time with a smuggled recording from Neewa, where she describes the "dark eyed man" (Nef Anyo) wanting to put them to work.

Again, players must challenge the Index, with the third match requiring 140,000 Credits

140,000 as a minimum wager. During this match, the first time the player attempts to deposit their earnings they will die from an unusual anomaly, with Glast exclaiming his surprise at what happened, and suggesting sabotage. Once players win this third match, Nef Anyo will relist Glast's brokers into the Index, allowing them to openly wager in the matches. Glast suggests that they use Nef Anyo's greed against him by subtly hustling him along their wagers, and that the Tenno not come on too strongly lest Nef Anyo backs out.

Players must now play a fourth Index match with the same rules as the previous matches with a 160,000 Credits

160,000 wager, but with an added condition: players are given a 10-point Victory Margin, which is the difference between points that they must maintain between their team and the opposing team. Unlike in previous matches, players must keep their score within the 10-point Margin, e.g. if Nef Anyo has 5 points, the Tenno's score must not exceed 14 points. Should the player win with a score exceeding the 10-point margin, Nef Anyo will back out, causing the mission to fail, and the player will lose their invested credits and receive no rewards if this happens.

When players successfully complete the fourth match, Nef Anyo will relent and put forth a trade where he will release the Triuna along with Neewa and the other prisoners if the Tenno win the next round, but if Glast loses then Nef Anyo will take all of his titles and holdings in return.

Another inbox message will arrive for the player back on the Orbiter, containing another voice recording from Neewa. The message reveals that the Triuna is not an object, but Neewa herself, and that she contains powers kept hidden to keep her safe.

Another Index match is held, costing the player 180,000 Credits

180,000, this time with Neewa on the line, and Glast wagering his entire holdings. As players proceed through the match, however, they will suddenly experience inexplicable deaths whenever they try to deposit their earnings, prompting Glast to accuse Nef Anyo of cheating, who denies the accusations. Meanwhile, Lotus tells the player to continue with the match while she investigates the anomalies.

As there is no way for the player to deposit Index points without dying during this mission, the mission will eventually end in defeat for the player after one round, with Nef Anyo proclaiming his victory over Glast.

Back in the Orbiter, Lotus confirms that Nef Anyo was indeed cheating during the match, and that she has managed to locate the systems responsible. In order to defeat Nef Anyo's traps, the Lotus assigns the Tenno to steal the control codes for his traps in order to render them unusable and thus give them a fair chance in the Index.

On arrival, players must complete a Spy mission where two of the three data vaults must be successfully hacked. Once a vault has been successfully hacked, the Lotus learns that what the Tenno managed to retrieve wasn't a control code, but a message from Neewa, which Lotus attempts to decode as the player continues on to the next vault. Players can proceed to extraction once all the vaults have been hacked, with at least two successful hacks.

Back on the ship, the decoded message from Neewa has her mention a ritual called "The Passing" which involves the transferring of the Triuna to someone else. When the Lotus asks Glast concerning what they found, he finally explains what the Triuna is: a genetic immunity to the Infestation, passed down from generation to generation of Myconians. It is revealed by the Lotus that the Infested fear hybrids, which Glast confirms is what allows the Myconians to harvest resources from the Infested peacefully. When the Lotus learns that the Triuna will eventually kill its bearer, she expresses her shock at the practice, to which Glast counters that the bearers do it for the greater good.

Glast challenges Nef to the Index one last time for Neewa and his holdings, but Nef refuses seeing as how Glast has nothing more to wager. It is then that Glast reveals the Myconian Old War relic to Nef to be his wager, explaining it to be a product of the Void which Nef would be interested in. Awestruck by the relic, Nef Anyo accepts the wager for another Index match. Unlike previous matches, players will not wager their own credits in the match, and will have the opportunity to regain 200,000 Credits

This last Index match will proceed with the same rules as the first 3 matches, allowing players to earn Index points at their leisure. If the player manages to win this match, Nef Anyo demands a rematch, making lucrative offers to Glast as wagers, all of which are refused.

On the ship, the Lotus hesitates to send Neewa back to her home due to her desire to cure the girl. This prompts an argument between the Lotus and Glast on Neewa's fate and what it could mean for the Myconians: healing Neewa will prolong her life but destroy the Myconian's way of life, while sending her home will allow the Myconians to live on with their traditions at the cost of Neewa's lifespan.

The Lotus gives the decision regarding Neewa to the Tenno, whom she points out has had similar obligations thrust upon them as children. At this point, players can choose between one of three different Alignment choices regarding Neewa's fate in the form of an inbox message that arrives afterwards:

Regardless of choice, players will be rewarded with the Myconian's Old War relic upon receiving the message: the blueprint for the 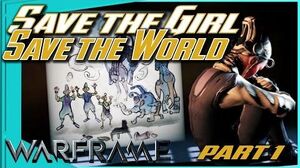 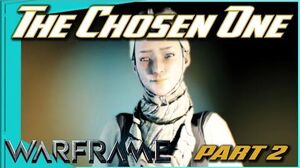 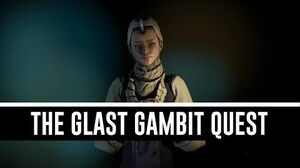 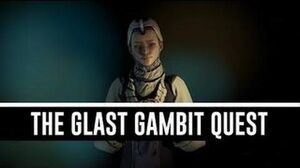