Stolen Dreams
Replayable
The Balor Fomorians are coming but we are ready. Through your efforts we finally have a working Archwing prototype and I am sending you the blueprint. However, your task is not yet complete. You still must discover the component parts.
—Quest Description

The Archwing is a main Quest introduced in Update 15.0 (2014-10-24) that introduces and familiarizes players with the Archwing flight system, along the way they will also be introduced to Orokin Sabotage and Excavation missions.

This quest is awarded upon unlocking the Mars Junction on Earth.

The threat of a Grineer Balor Fomorian, the capital ship of the Fomorian fleet, tips the balance of power within the Solar System. Councilor Vay Hek declares war on the Corpus and the Chairman of the Corpus Board of Directors, Frohd Bek, in an attempt to seize total control over the Origin System.

The player is forced to construct an Orokin-era mechanical wings, an Archwing, along with an Arch-gun and Arch-melee, to destroy it in space combat. To do so they will need to find the Odonata component blueprints that are scattered across Orokin archives throughout Venus. After obtaining their new gear, the player tries to sabotage the Fomorian, only to realize that they do not have enough firepower to do so. After destroying dozens of Grineer fighters, the player performs a tactical retreat, leaving the real battle with the Fomorian to happen another day.

The Time is Now[]

Upon beginning this quest, Lotus will send an inbox transmission to the player along with an Odonata blueprint, noting that they finally have a working Archwing prototype and orders the Tenno to gather the materials needed to craft it.

The Balor Fomorians are coming but you will be ready. We finally have a working Archwing prototype and I have sent you the blueprint.

This is where your task begins. You must recover blueprints for the component Archwing parts.

We know these were scattered throughout the system. We also know the Corpus are in possession of a lost Orokin archive, detailing their locations.

Recover the archive and then find the blueprints needed to forge your Archwing. Good luck, Tenno.
—Lotus' Transmission

The Tenno deploys to Tessera, Venus, in a mission to retrieve the Orokin Archive coordinate from a Corpus stronghold via Orokin Void's portal. This mission reintroduces the Orokin Sabotage game mode from the Operation Gate Crash event; the Tenno must reverse the flow of the portal via a nearby Orokin Generator which they must defend it from oncoming Corpus. Once it has completed, the Tenno must traverse to the Corpus via the portal to retrieve the Void Key from the Corpus Lynx proxy, and then destroy the portal by overloading the Orokin Torsion Beam Device to make sure the Corpus couldn't salvage the Orokin Tower further.

There are three optional Orokin caches, in the form of an Orokin locker with white light, in the void part of this mission only the marked cache is needed to retrieve the archive. All of the caches can be found before trying to reverse the portal. The first resource cache discovered can contain Void Relics, while the second has a larger chance at obtaining rare resources, and the last cache discovered can award Forma.


Ordis will immediately inform Lotus of the Orokin Archive along with its coordinates to locate the Archwing components needed. Each successful excavation will yield a random Odonata component blueprint. Much like normal excavation, players can extract as soon as the first excavation is completed.

Once all three blueprint parts of the Odonata (Wings, Harness and Systems) have been obtained, Ordis will persuade the player to build the Archwing. After the Archwing is constructed the player will need to "Discover" the component parts.

The Lotus will then order the Tenno to deploy to the Montes sector of Venus, and infiltrate a Corpus Ship with the intention of retrieving intelligence about the Grineer Balor Fomorian by first exterminating all opposition.

However, the mission is abruptly interfered with by the presence of Grineer Fleets led by Councilor Vay Hek, who contacts Frohd Bek over severing ties with the Corpus. The Corpus Ship is soon boarded by Grineer marines as it suffers severe damage from heavy bombardment with the surprise arrival of a Balor Fomorian. The dire situation forces the Lotus to order for a mission abort and calls for the Tenno to head to the extraction point, however, Ordis informs her that extraction may not be possible due to the extensive damage suffered by the ship, ultimately leaving the Tenno without any means of escape. If there is only one chance to escape the ship alive, it is to delve into the deep space. The Tenno makes its preparation, charging its Warframe before diving into the great unknown. The Lotus -- Somewhat in a forceful manner, orders Ordis to deploy and attach the Archwing to the Tenno, along with their respective weapons,

The Archwing is a set of mechanical wings used by Tenno to fly and engage in combat in space, offering a potent mix of firepower and mobility to engage spaceborne enemies.

Once the player successfully docks with the Archwing, they will need to reach a new extraction point out in deep space away from the battle. Grineer spacecraft, however, will deploy Zeplens, large devices deploying energy nets that can trap the Tenno inside their radius. Players will need to destroy the Zeplen units in order to advance while destroying any enemies along the way while at the same time avoid getting seen by the Balor Fomorian's weapons – A single shot could mean demise.

The Tenno, with a valiant effort, escaped the range of Balor Fomorian, and immediately extract with their Liset in space before the Fomorian could reach them. It was a successful retreat – however, it also means victory. But the real battle has yet to begin. And by the time it comes, the Fomorian will be ready, but so will the Tenno.

Completing this mission will complete the quest, unlocking Archwing nodes throughout the solar system as well as granting access to other Archwing blueprints and their respective arsenal. Empyrean game mode is also unlocked in the Star Chart after the completion of the quest. 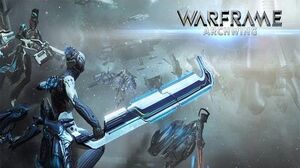 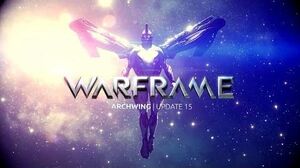 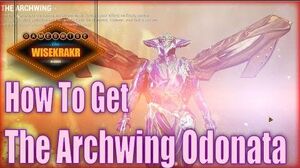 HOW TO GET THE ARCHWING ODONATA Update 15 - Warframe Hints Tips 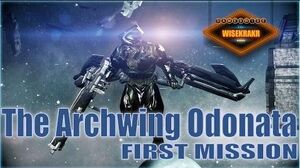 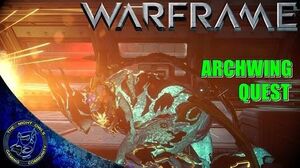 In order to improve the flow of progressing through quests, every quest mission is now in a location which was previously completed or unlocked, and only in regions which are unlockable before the quest completion is required. Below you will find a full list of each quest node location including the reordered nodes: