Please do not use this article for critical in-game information!
Tesla has been replaced by Tesla Nervos in Update 26: The Old Blood.
This article is archived.
The content was relevant to an obsolete version of Warframe, and has since been removed, retrieved, and/or revamped.
Info
Augment 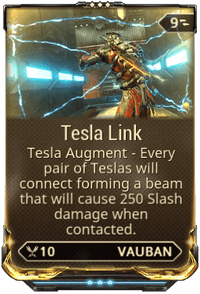 Retrieved from "https://warframe.fandom.com/wiki/Tesla?oldid=2170048"
Community content is available under CC-BY-SA unless otherwise noted.