The Sentients had won. They had turned our weapons, our technology, against us. The more advanced we became, the greater our losses. The war was over unless we found a new way. In our desperation we turned to the Void. The blinding night, the hellspace where our science and reason failed.

We took the twisted few that had returned from that place. We built a frame around them, a conduit of their affliction. Gave them the weapons of the old ways. Gun and blade. A new warrior, a new code was born. These rejects, these Tenno, became our saviors. Warrior-Gods cast in steel and fury striking our enemies in a way they could never comprehend.

The Tenno are the faction controlled by the players. Each player is a Tenno with a suit of biomechanical armor called a Warframe. The combat abilities provided by Warframes are vastly superior to both the Corpus' high technology and the Grineer's vast numbers; even the most inexperienced Tenno can fight their way through hordes of basic foot soldiers alone, and teams of experienced Tenno can best even the deadliest enemy threats.

Awakening from a deep slumber to a hostile world, the Tenno know little of themselves.

Each Tenno bears a primary weapon, a sidearm, and a melee weapon. Their arsenal includes rifles of various types, shotguns, pistols, swords, and exotic melee weapons such as staves, axes, and power gauntlets. Different Warframes offer their own unique powers, ranging from

Volt's burst of superhuman agility to

“You're not supposed to be in here! You're going to ruin the surprise!”
The following article/section contains spoilers. Please finish The War Within quest before proceeding.

At the height of their Empire's reign, the Orokin became embroiled in a war with the Sentients: a creation of theirs long ago sent to the Tau System to prepare for colonization, whose advanced technologies allowed them to quickly adapt to every attempt by the Orokin to defeat them. Each attempt by the Orokin to defeat the Sentients failed, so they turned in desperation to their last hope: the Tenno.

The Tenno were created in an incident long before the war, during the so-called "Void Era", when a ship called the Zariman Ten Zero became involved in a void-jump accident that sent it lost in the chaotic sub-dimensional space known as the Void. The ship reemerged from the Void and was recovered only days later, completely intact, but the only survivors found were children, whose exposure to the Void's energies had twisted and changed them, giving them inexplicable powers and abilities. Feared and reviled, the survivors of the Zariman nonetheless were of great interest to the Orokin.

Initial experiments on how to harness the children's powers though led to several fatal accidents, which showed the danger their uncontrolled powers could wreak both on themselves and on others. It was the work of an Orokin researcher named Margulis that led to a breakthrough; through dreams, the children could focus and control their powers. However, this research would then be taken from her after she was executed for trying to protect the children, and used to create a process known as Transference; the children's consciousnesses and powers could be remotely channeled through a surrogate body called a Warframe: a specially-made techno-organic humanoid battle frame designed to enhance and focus the children's powers, using a device known as a Somatic Link. The survivors would be placed in Somatic Link pods in a facility known as the Reservoir located on the Moon, to control their surrogate bodies in a secure location away from their enemies.

These operators, newly christened as the "Tenno", were taught the ways of war. With the combination of advanced technologies and esoteric powers, the Tenno began to turn the tide against the Sentients, allowing them to vanquish the Orokin's enemies across many battles.

In the backdrop of the Orokin's collapse, the machinations of the Sentients continued; a plan had long been hatched to infiltrate the Orokin and destroy the Tenno. The agent given the task, named Natah, grew close to the Tenno she was supposed to destroy. Betraying her own kind, Natah used her considerable powers to hide the Moon within the Void, keeping the Reservoir and the Tenno they hold hidden from the Sentients, and the Warframes scattered throughout the Origin System were made to sleep in cryostasis. Natah, taking on the mantle of the Tenno's caretaker and guide, remade herself as the Lotus, keeping watch over the sleeping Tenno until the time they would wake once again.

The Tenno have created a huge amount of "home grown" weaponry and equipment – much of it descended from Orokin counterparts, but some of it original. Tenno weapons, in general, tend to feature smooth lines, symbolic design, and an "organic" shaping that gives them a sleek, predatory look. Weapons of Tenno origin are among the most commonly available weapons to players. 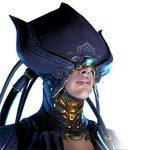 Upon revival from stasis, the Tenno is guided by a figure known as the Lotus. Asserting preservation of her people by any means necessary, the Lotus dispatches and guides Tenno through missions of espionage, sabotage, defense, extermination, interception and rescue. On these missions, the Lotus guides Tenno using audio commands transmitted from an unknown location. Like the rest of Tenno culture, she remains shrouded in mystery, though the Natah quest sheds more light into her origins and motives.

Hostage Operatives liberated during Rescue missions are human and wear jumpsuits that bear the Lotus emblem, which indicates that the Lotus has many non-Tenno agents carrying out her orders. This is also indicated by her mention of various spy-cells and supply-raiding operatives, as well as the non-Tenno NPCs crewing the Relay stations.

The Orbiters are spacecraft used by the Tenno to travel throughout the Solar System to and from missions. They also act as the Tenno's mobile base, carrying all of their various equipment and arsenal of weapons. An Orokin AI called Ordis acts as the main computer for the Tenno's ship.

“You're not supposed to be in here! You're going to ruin the surprise!”
The following article/section contains spoilers. Complete The Second Dream first before viewing.

With the creation of Warframes, the Tenno founded five schools of combat that compliment various personalities and fighting styles:

“You're not supposed to be in here! You're going to ruin the surprise!”
The following article/section contains spoilers. Complete The War Within first before viewing.

In the WARFRAME universe, there are a few named Tenno characters aboard the Zariman Ten Zero before the Void-Jump Incident: